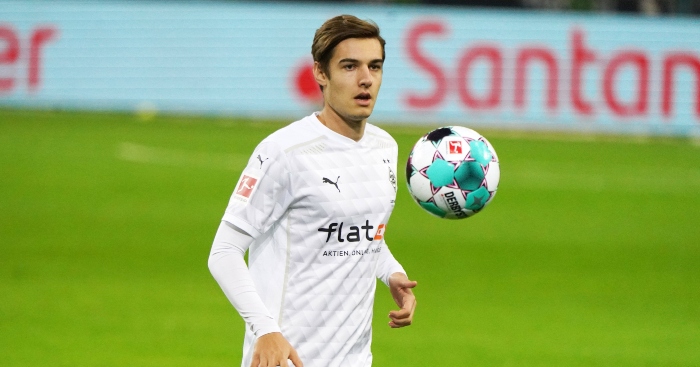 One of the joys of watching football and seeing an extraordinary piece of skill is asking yourself, ‘Did he mean that?’

Minds may venture back to Ronaldinho’s free-kick against England in the 2002 World Cup or Paul Konchesky’s overhit cross in the 2006 FA Cup Final.

The art of the pass is slightly different. With top-level football essentially a game of chess-like movements, containing players coached to within an inch of their lives, it is hard to call any pass a complete fluke.

However, this through-ball from Borussia Monchengladbach’s Florian Neuhaus has us questioning all our footballing assumptions.

During the Champions League group match at Inter Milan, with the game delicately poised at 1-1, Neuhaus receives the ball inside his own half and a myriad of options present themselves to the midfielder.

The Germany international opts for the least rational of them all. Without even taking a touch, Neuhaus unleashes a mole-murdering through ball that dissects the Inter defence in the manner of a university cadaver.

Had Neuhaus spotted the gap between the defensive line and possessed the vision to take advantage of it? Or is he simply been trying to get the ball as far away from his own goal as possible? Is the real genius the stepover from the Gladbach striker to allow the ball to realise its full potential of travel?

Either way, the pass found its way to Jonas Hofmann, putting him clean through on goal. At this point, such was the quality of the pass, it would have been almost rude if Hofmann had spurned this golden opportunity. Thankfully, he tucked the chance home with aplomb.

At the time, it looked likely to give Gladbach a priceless away win. Unfortunately for them, Romelu Lukaku plundered an injury-time equaliser and the game ended all square.

After watching the video countless times, we still can’t decide whether Neuhaus’ assist was absolute genius or a complete fluke.

Watch: Joe Gomez fumes after being tackled by Adrian, *his own keeper*