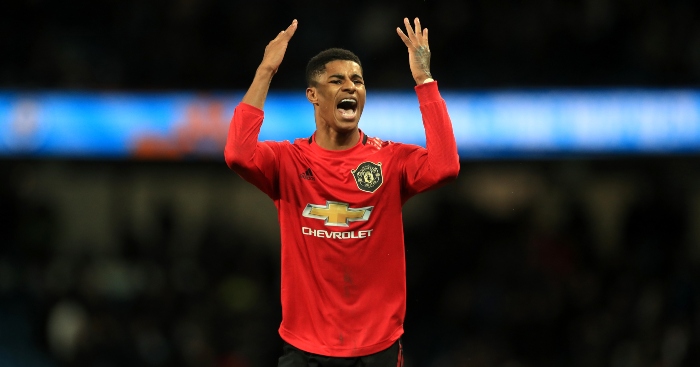 In an individual and collective performance lauded for its attacking verve and pace, Marcus Rashford provided the most startling moment in Manchester United‘s 2-1 victory over Manchester City by simply standing still.

This was no stereotypical encounter between two of the Premier League’s biggest clubs, which usually see both sides warily jab at each other for fear of leaving themselves open to a knockout blow. Instead, the red and blue halves of Manchester came out swinging, as if they knew Anthony Joshua had earmarked his bout with Andy Ruiz for the day’s cagey affair.

That played into United’s hands, leaving their front three with huge swathes of alluring green grass just asking to be run into.

Yet Rashford bode his time before making his mark on the game, instead watching Anthony Martial and Daniel James wreak havoc. While the duo created, and spurned, chances early on, Rashford was at ease in patiently getting a feel for the game, pulling the strings with cute passes rather than eye-catching bursts from the left flank.

It speaks volumes about the confidence with which Rashford is now playing. He no longer feels the need to desperately try force himself onto the game, safe in the knowledge chances will eventually come his way, and when he’s playing this well, he’ll take one.

It was only a couple of months ago that the forward appeared in a rut and his ability was being questioned by the press, pundits and the public. Forbes even published one piece titled: ‘Is Marcus Rashford Good Enough For Manchester United?’. ‘Marcus Rashford the biggest victim of Manchester United fall from grace,’ ran a headline in The Guardian after the defeat at Newcastle.

Crucially, this was a period in which he was robbed of his partner-in-crime Martial through injury. Since the Frenchman made his return as a substitute in the 1-1 draw against Liverpool, Rashford had scored nine goals in 10 games for United heading into the derby. And with Martial causing City a myriad of problems linking up with James, Rashford could afford to weigh up where and when he could make the most telling impact.

Eventually, 20 minutes in, Rashford blew the game wide open, cutting in from the left flank to find himself surrounded by five City defenders. One feint into the box was enough to tempt Bernardo Silva into wiping him out, and the 22-year-old showed commendable composure to convert the spot-kick after a lengthy delay while the incident was reviewed by VAR.

Minutes later, the England international could, and possibly should, have had a second after producing an incredible homage to the Road Runner to support Fred, only to put the ball wide.

Rashford’s insane burst of speed to get up in support of Fred. pic.twitter.com/3KUtLQpxK9

Another couple of minutes later, Rashford produced arguably his most impressive moment of the match. James scampered down the right and prodded the ball on for Martial, who in turn found Rashford at the edge of the area.

Three years earlier, Rashford collected the ball at the Etihad in a similar position in his first Manchester derby. Less than a month after making his senior United debut, he skipped past Martin Demichelis, who was left in a heap on the floor, to score one of the defining goals of his early career.

It was a goal which sums up all the best qualities we associate with Rashford, whose quick feet and directness will still haunt Demichelis to this day.

But when he received the ball at the Etihad this weekend, he instead just stood still. With his reputation now preceding him, Rashford showed a subtlety to his game he is not always given credit for. Kyle Walker backed off slightly for fear of suffering the same fate as Demichelis or Bernardo Silva, and that allowed Rashford to curl an insouciant dink that cannoned off the crossbar and behind for a goal kick with Ederson stranded.

Turning away in frustration, Rashford couldn’t help but offer a wry smile, a player recognising just how good he is, now able to mould a game around his own abilities.

The narrative around Rashford has suddenly changed. The Guardian’s latest piece is headlined: ‘Irresistible Rashford delivers on the biggest of stages for United’, in which Barney Ronay ponders: ‘Is there a better attacking player in the country right now than Marcus Rashford? There’s a sentence you wouldn’t have expected to read eight weeks ago.’

Thankfully, Ronay answers his own question with a sentiment we should all be able to agree on: ‘Never mind that, just enjoy the show.’