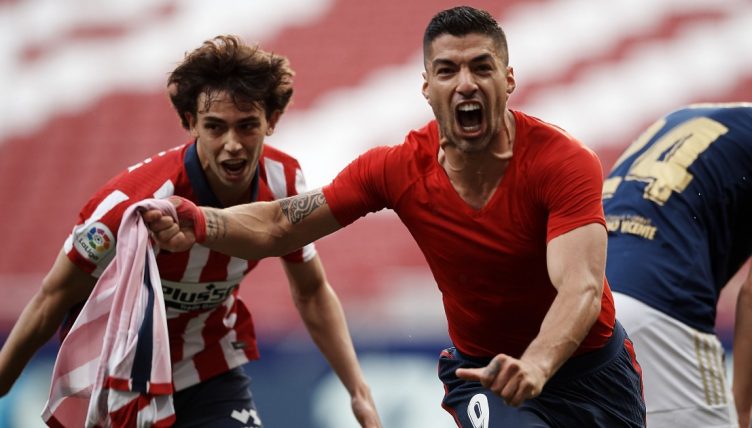 Luis Suarez hadn’t scored in his last five league appearances. He hadn’t scored since a match-winner against Alaves on March 21. And for most of the 90 minutes against Osasuna at the Wanda Metropolitano on Sunday night, it looked as if Atletico Madrid‘s Uruguayan striker would go without scoring again.

Suarez had knocked and knocked and knocked at the door. Chance after chance had been created and narrowly spurned. Atletico had pressed and probed and then, completely against the run of play, conceded first with 15 minutes to go. For a short time, it looked like rivals Real Madrid would take the lead in La Liga for the first time since October on the penultimate matchday.

Then Renan Lodi’s equaliser gave Atletico hope and, finally, finally, Luis Suarez got his last chance. He had been waiting the whole second half for it, the one perfect opportunity to get his 20th league goal of the season and be the hero to answer Diego Simeone’s prayers.

Suarez spread the ball to Kieran Trippier on the right wing, who played a first-time pass to Yannick Carrasco. Carrasco twisted and turned and sent a low cross towards the penalty spot. Suarez was lurking. Of course he was. His right boot went through the ball, the ball arrowed towards the bottom corner and Suarez wheeled away, ripping his shirt off over his head.

The whole Atletico team piled on top of him. Suarez’s sheer bloody-mindedness had reaped rewards and, with two minutes left, Atletico were back in control of the title race.

The goal was a good one from a collective perspective, but it was far from Suarez’s most spectacular. One thing it did better than most, however, is sum up what makes Luis Suarez Luis Suarez. The Uruguayan is football’s Mr Persistent – a man to go after goals and glory like a starving dog after a sirloin steak. At the most critical moments, he usually delivers them too.

The way he left Barcelona last summer was a shock to the system – to him, his team-mates and most football observers. Barcelona felt he was over the hill, and allowed him to leave for Atletico. “Madness” was the word Lionel Messi used to describe the decision, and he was soon proved right as Suarez scored 16 goals in his first 17 league games in the unfamiliar red and white stripes of his new club.

Yet after early February the goals dried up. A short-term injury halted Suarez’s momentum and neither he nor Atletico could fully recover. That goal against Alaves in March was his 19th of the season and a 20th would mean a contractual bonus from Atletico. But try as he might, none had come in his last five.

Then, against Osasuna, 1-0 down with 15 minutes to go, it looked like a fifth La Liga title – as well as the extra cash – might be slipping from Suarez’s grasp. He had had a series of opportunities in the first half. He had seen an early effort saved by Sergio Herrera, he had dragged a shot wide, he had missed a backheel flick that you would usually back him to score, he had hit the post from all of five yards.

Before the game, Simeone had said that the season had “entered the Suarez zone”, a time at which players like him – mentally strong, used to winning titles – would come to the fore. When Osasuna scored, then, we were entering a Suarez zone inside a Suarez zone, the pressure ramped up to levels that most normal human beings would be unable to handle.

When a water break interrupted play just after Osasuna’s goal, Simeone had a simple message for his players: “We have to be strong in the head.”

They took the message on board. Then Lodi came up with a brilliant equaliser from Joao Felix’s deliciously weighted pass and, with two minutes to go, the man whose zone we were all inhabiting produced.

Suarez had kept going – after the rejection from Barca, after his poor run of form, after all his misses in the first half – and right at the end, right when it looked like Real Madrid might snatch the title from his grasp, his perseverance paid dividends (quite literally, for him).

“I knew it wasn’t time to take Suarez off,” Simeone said post-match, with the smile of a man who never stopped believing. “I knew with the ball in and around their goalmouth, with [Moussa] Dembele and [Suarez], with Joao [Felix] on one side and [Yannick] Carrasco on the other, something could happen and, well, it happened.”

It did. And it wasn’t by chance that it happened to football’s most compulsive, manic, indomitable pursuer of the onion bag. Don’t doubt Luis Suarez, he’ll come back to… well, y’know.