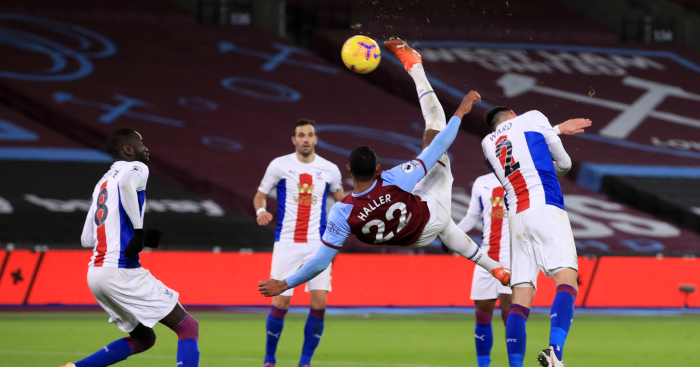 Sebastien Haller is the sixth most expensive striker in Premier League history. His spectacular overhead kick during a 1-1 draw with Crystal Palace finally reminded West Ham fans what all the hype was about.

Until the second coming of David Moyes and the beleaguered implementation of a coherent transfer policy, West Ham were the biggest suckers in the transfer market.

Seduced by brief runs of form and feeling obliged to pacify a tempestuous fanbase, the club regularly paid over the odds for ‘big-name’ players to create the illusion of progress.

The signing of Haller after an impressive season with Eintracht Frankfurt before proceeding to play him out of position, drop him from the side altogether and almost default on the transfer instalments was more West Ham than Danny Dyer eating a plate of jellied eels.

Despite a rocky start, there was a feeling that a good player lurked under the mask of low confidence. On his debut, a 5-0 spanking against Manchester City, his chest control and heading ability stood out among the familiar mediocrity.

Now, thanks to Michail Antonio’s delicate hamstrings, Haller is enjoying another run in the first team. One goal, a thumping winner at Sheffield United, almost bought an elusive smile to his face, but his miss against Manchester United seemed more typical of Haller’s Premier League contribution to date.

Yet Haller always seemed like a striker capable of jaw-dropping pieces of athleticism, and he chose a bog-standard match to do just that.

In possibly the most mid-table encounter the Premier League can conjure, West Ham were trailing to Palace and in danger of undermining their recent run of good form.

Enter Sebastien. Attacking a centre from the underrated Vladimir Coufal, Haller contorted his body mid-air and slammed an overhead kick past the stunned Vicente Guaita.

The Ivory Coast international jogged away as if such feats of breathtaking skill are as blase as taking the bins out.

He tried at Leeds and he executed it exquisitely tonight. In case anyone forgot, Sebastien Haller is a f*cking finisher.

Travelling back from Newcastle’s defeat at Leeds, Andy Carroll must have lifted a glass in recognition of Haller aping his equally spectacular goal against Palace.

Across Europe, it’s possible to imagine the great Zlatan nodding in approval when catching a glimpse of the strike on social media.

In fairness, Haller had almost scored a similar effort in the recent win at Leeds, so perhaps we should have been warned that such a moment was incoming.

After a turbulent spell in east London, maybe Haller will come good after all.