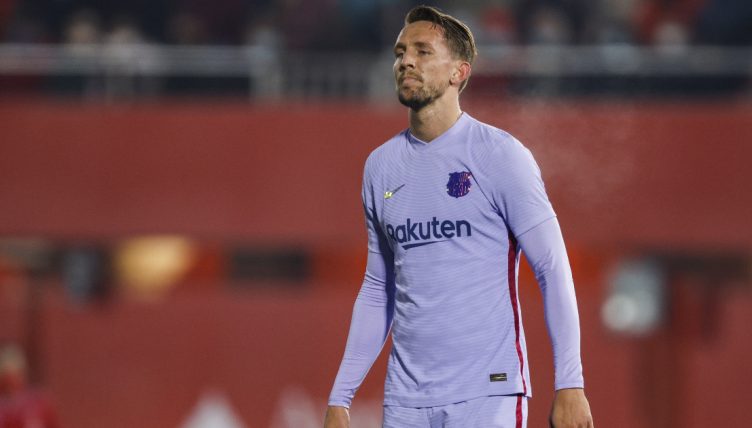 Luuk De Jong must be one of the most heavily criticised players in the world right now.

A bizarre deadline-day loan signing from the Sevilla bench, Barcelona fans have not warmed to the Dutch striker at all, and probably never will.

The imposing 31-year-old target-man had become a symbol for the recent downfall of one of the biggest clubs in the world. Years of poor transfers and financial mismanagement meant that the club ended up losing Lionel Messi in the summer window, a previously unthinkable situation.

The black hole in the Barcelona bank accounts also meant that, in addition to losing the greatest player of all time, they could not even attempt to sign a top-class replacement.

Sergio Aguero arrived, but injury and health heartbreaks ended his Barcelona career before it even began, and transfers with a fee were near enough impossible.

By the end of the window, Barcelona were desperate for a forward, whilst barely being able to buy one. A loan deal was therefore deemed the best option, and Ronald Koeman opted for his compatriot, who a year before had scored twice in Sevilla’s Europa League final victory.

Those who were sceptical of the signing, for both his ability and poor tactical fit, can consider themselves proven correct. With just one goal in 13 matches before the Mallorca game, there was no sign that De Jong would ever become the player to lead Barcelona back to the top.

However, heading into a crucial game at Son Moix, Xavi selected the striker to start simply out of a lack of other options. In an almost unrecognisable starting XI mostly comprised of youngsters, De Jong led the line superbly.

A front three of Ferran Jutgla, De Jong and Ilias Akhomach, with nine league starts between them, required experience to gain a hard-fought result on the road. And that is exactly what De Jong provided.

It all seemed to be going wrong for him at the start, when he found himself in a decent shooting position, only to put the ball out for a throw-in, but the striker recovered superbly.

The striker’s physical presence in the box caused nightmares for the Mallorca defence, and was incredibly unlucky midway through the first half to hit the woodwork twice in two minutes.

His second effort was an acrobatic overhead kick which nearly shattered the crossbar, and would have been a strong contender for goal of the season if it had found the back of the net.

😱 @LuukdeJong9 almost scored the GOAL OF THE SEASON before his opener…

The forward persevered after these near misses, and eventually got his reward.

Just before the end of the first half, De Jong was on hand at the back post to nod in Oscar Mingueza’s floated cross, before wheeling away in celebration.

After hitting the post earlier in the half, Luuk de Jong puts Barca in front just before half time! 🔵🔴

A towering header at the back post from the Dutch striker 💥 pic.twitter.com/BFZLkFgr9I

This clearly gave De Jong a burst of confidence, and he continued to be dominant in the air as Barcelona held on for all three points, and they had Marc-Andre Ter Stegen to thank as well as their target man, ironically the two players who have received the most flak this campaign.

With the imminent arrivals of Ferran Torres and possibly Alvaro Morata, De Jong’s future opportunities look heavily limited. It is unlikely that his loan stay will be made a permanent one, and it is unclear where his future lies. In spite of this, he remained professional when called upon, and grafted away all game.

Speaking to La Liga TV after the game, he claimed that despite all the criticism and limited minutes, he “never felt mistreated.”

“Everyone has always been honest to me, I know my situation, where I come from,” he stated. “I just keep working hard in training & if the coach needs me I will be ready.”

Whilst he doesn’t possess the talent of the likes of Luis Suarez or Samuel Eto’o before him, a lot of players can learn from De Jong’s exemplary attitude and application in the face of limited opportunities and a lack of respect from fans and media alike.

Where are they now? Barcelona’s 15 wonderkids from Football Manager 2012