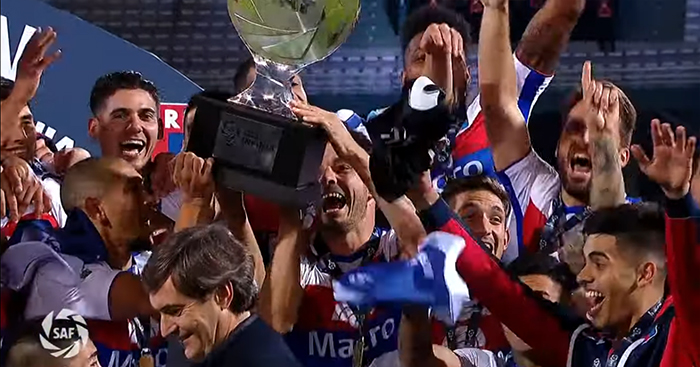 On Sunday night, Tigre beat the mighty Boca Juniors 2-0 to win the Copa de la Superliga and crown what must be among the most eventful three months for a single club in football history.

A brilliant end to the season, Tigre have secured a top-10 finish in Primera División, a first-ever major title, qualification for the group stages of the Copa Libertadores and…relegation?

Argentinian football, for all of its many virtues, has never been renowned for its organisational coherence or copious quantities of common sense. And in an incredibly short space of time, Tigre have been both victim of and victor in this weird and wonderful world.

After more than a decade spent in the country’s top-flight and despite their respectable league position, this year Tigre succumbed to the promedio system, which decides relegation on a three-year points average.

They had started the campaign looking dead certs to go down. But after Nestór Gorosito took charge in February, El Matador went on a brilliant run, winning five of their last seven in Argentina’s top-flight.

Their ninth place would usually be enough to secure a place in the Copa Sudamericana, South America’s secondary continental competition.

But a draw against champions Racing in the penultimate game was enough to seal their fate. Their average, despite not having finished in the bottom four in any of the last three seasons, would send them to the Nacional B.

To add insult to injury, that Copa Sudamericana place would be taken away as a result of the relegation.

That was merely the start of the story.

Argentina is in the middle of the slow process of reducing the Primera División from 30 to 20 teams. Currently with 26, there is insufficient time for every side to play each other twice, but not enough games to fill an August to June calendar.

The authorities’ solution was to tack a quick-fire knock-out tournament onto the end of the regular season. All the Primera División teams would take part, even the four that had been relegated, and the winner would be rewarded with a spot in the group stage of the Copa Libertadores.

Since his appointment, the perm-sporting Gorosito had got Tigre playing some of the best football in the country, with ex-Argentina international Walter Montillo controlling games from his position just behind the centre forward. So their fans would go into the Copa de la Superliga with high hopes.

Yet things did not start as planned. In the second leg of their first-round tie, El Matador were 2-0 down to Colón de Santa Fe. But Gorosito’s men rallied at half-time and completed a 3-2 comeback in the 81st minute.

In the next round, they would face Colón’s cross-city rivals Unión. A 2-1 loss in the first leg and early goal in the second saw them two down on aggregate once more. Again they came storming back, going through 4-3 to face league winners Racing, the team that had confirmed their relegation.

The press had christened them ‘Tigre of the miracles’ and they would need another.

A 2-0 first-leg home win was just about enough, and Tigre were able to claw their way through the second game, taking the semi-final spot 2-1 on aggregate.

Meanwhile, South American football’s governing body Conmebol decided to interfere in this organisational mess. With great pomp and purpose, they announced that no team would be able to play in continental competition if they were not in their country’s top division.

Tigre, then, risked being stripped of their Libertadores spot were they to lift the Copa.

They powered on regardless, swatting Atlético Tucumán aside 5-1 and setting up a dream final with Boca Juniors.

As they did, the national football associations in Argentina and Brazil kicked up such a fuss that Conmebol had been forced to go back on its decision. Tigre once more had the added incentive of a spot in the continent’s premier club competition.

Despite reaching the final, Boca weren’t in great form. But Boca are Boca and were strong bookies’ favourites.

The 2018 Libertadores finalists started the game well, too, with Darío Benedetto hitting the post after a quarter of an hour and Sebastián Villa forcing a smart save from the Tigre ‘keeper Gonzalo Marinelli moments later.

But goals change games and Boca gifted the first to Tigre. Some shoddy defending saw the ball fall to Fede González on the right. He cut in, shot and saw his weak effort squirm under Esteban Andrada at the near stick and trickle over the line.

Boca were shaken and Tigre capitalised. González set Lucas Janson free through the middle, he was dragged down and Nestór Pitana pointed to the spot. Janson stepped up and saw the ball again wriggle under Andrada’s diving frame.

In the second half, Carlos Tévez and Benedetto both hit the bar, Mauro Zárate whipped a free kick just past the upright, and Benedetto saw a rasping drive stopped by the right hand of Marinelli.

Sometimes, you just know it’s your night. And as the final whistle approached, the expectant wall of noise from the Tigre end grew louder and louder.

The end came and the ground erupted. Montillo burst into tears on the pitch and, as he had wished before the game, Tigre can now “put a star” above their badge.

So, they will go into 2019-20 as Copa de la Superliga champions, Libertadores hopefuls and a second division club.

“Obviously,” Montillo told the press on Saturday, “we can’t change the past. [But] the authorities are the ones who have to change the system.”

With the outrage that Tigre’s glorious demise has caused in Argentina, that finally looks like it will happen. Over the next two years, the Superliga organisers have promised, the promedios will be phased out and a normal relegation system brought in.

But for Tigre fans, the institutional incompetence has been a blessing as well as a curse. They may have gone down, but they were given the chance to celebrate their club’s first ever silverware.

And as they jumped up and down on the terraces on Sunday night, they wouldn’t have swapped that feeling for the world.