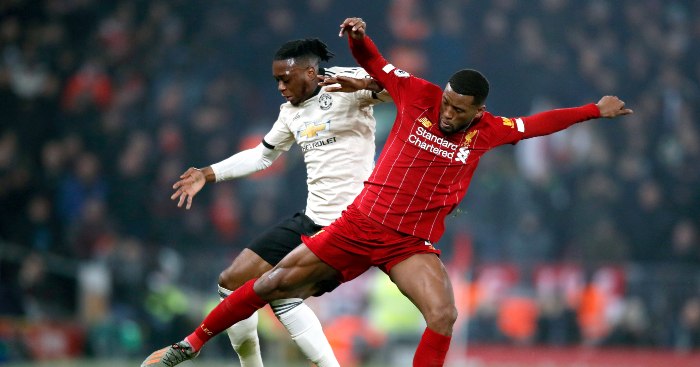 Gini Wijnaldum’s time at Liverpool could come to an end this summer with the 29-year-old heavily linked with a move to Barcelona as part of Ronald Koeman’s rebuilding task, although reports suggesting a bid has already been submitted are said to be jumping the gun, according to The Athletic’s James Pearce.

Wijnaldum has certainly come a long way since being picked up by Steve McClaren for Newcastle back in 2015, where he proved the only shining light in a disastrous relegation campaign.

Since moving to Liverpool, Wijanldum has made himself a key part of Jurgen Klopp’s historic Premier League and Champions League-winning side.

His performance in the Champions League against Barcelona may spring to mind when you think about his time on Anfield. However, it was actually against Manchester United earlier this season when Wijnaldum showed himself to be Liverpool through and through.

Channelling his inner Steven Gerrard/Xabi Alonso/Jari Litmanen, Wijnaldum covered just about every blade of grass and bullied United like a bigger boy playing against the year below at school.

The compilation of his performance could almost be labelled NSFW, with the Dutchman putting in an absolute shift in the 2-0 win back in January.

It starts with him robbing Andreas Pereira, a theme that continues pretty much throughout the video. Wijnaldum spent the entire 90 minutes making fools of Pereira, Fred, and Nemanja Matic, with Fred becoming his first nutmeg victim of the night.

Between his superhuman displays of strength, intelligent passing, quick feet and superb ball retention, Wijnaldum also popped up in United’s penalty box to finish off a truly beautiful move by Liverpool, only for it to be given offside.

The piece de resistance of the performance though was the nutmeg on Harry Maguire. The United captain closed him down with such certainty only to be sent back to Sheffield United by Wijnaldum.

Maguire looks so confused at what’s just happened to him; he needs a moment to turn back and look at the Liverpool maestro who didn’t even bat an eye at what had happened. Wijnaldum was daring enough to try the trick, knowing if he got it wrong he’d have Maguire clattering into him at full-pelt.

Maguire’s slow jog after the midfielder was somewhat reminiscent of Peter Reid trying to catch up to Diego Maradona at the Azteca in 1986; only Reid didn’t get his pants pulled down quite so badly.

Incredibly, despite dominating United and running Liverpool’s midfield, he wasn’t deemed worthy of the Man of the Match award, with Virgil van Dijk picking it up instead. That might really be a perfect way to describe Wijnaldum as a Liverpool player: understated but gets the job done.

The same happened in the Champions League win over Barcelona. He came on at half-time for Andy Robertson, worked his magic —as a good Gini should do — scored two key goals, ran the midfield, and was ultimately talked about behind Trent Alexander-Arnold and Divock Origi.

He can play anywhere, he does everything you could ever want from a midfielder, and he puts in a shift in every game. This performance epitomised Wijnaldum’s time at Anfield.

If he does move to the Camp Nou, he will be incredibly difficult to replace, but you suspect a part of him will always remain in Liverpool.