With Lazio, Sarri can finally get back to railing against the establishment 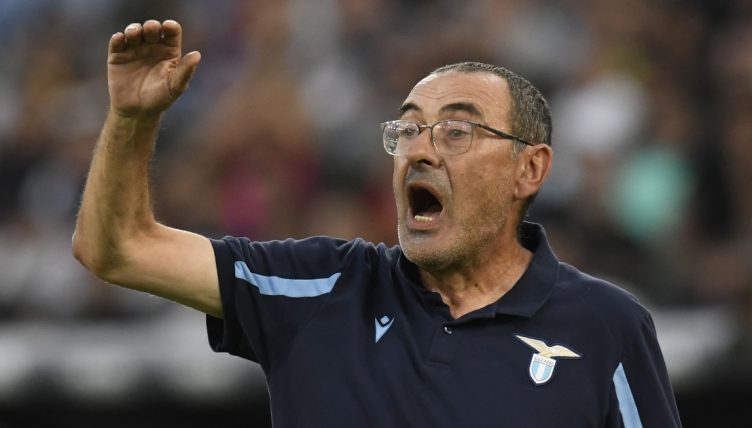 It was a fitting end to a wild and beautiful Derby della Capitale.

Maurizio Sarri, coach of the winning team Lazio, stood on the running track surrounding the Stadio Olimpico pitch looking incredulously at the eagle perched on his arm.

Olimpia, Lazio’s club mascot for the past 11 years, is quite something to observe: a 12kg bird of prey with a two-and-a-half-metre wingspan.

Sarri quickly realised he would be unable to support her weight with one arm, bringing the other up and holding his new friend up close. In the background, the Curva writhed in delirious joy at beating their hated rivals – Jose Mourinho’s Roma – by three goals to two.

Rumours that a local man was later arrested in the Rome area for teaching bird of prey to smoke cigarettes are currently unfounded.

As ever, Sarri managed to look both bashful and extremely cool at the same time. It was exactly these qualities that made him such a memeable manager during his year in the Premier League and meant fans of neutral teams couldn’t quite keep their eyes off the Chelsea manager.

This is the happiest I have seen Papa Sarri since the EL final win. What a man.
Wholesome moment. pic.twitter.com/xjXyBYWkst

And it was those images – the chain-smoking, the tracksuits, almost walking out of Wembley after Kepa’s insubordination – that define popular perception of Sarri.

The Sarriball, a style-of-play based on possession and pressing from the front that won him admirers at Napoli, has generally been forgotten or turned into a punchline to an increasingly tiresome joke.

Sarri’s season at Chelsea never lived up to the aesthetics he created at Napoli but it did bring a European trophy. The football could be stodgy but it was miles better than the open door policy the defence operated under Frank Lampard.

A surprise move to Juventus followed but it never felt like the right fit. Sarri is a man that prides himself on railing against the establishment yet Juve were put out that their manager refused to wear a suit.

He won the Serie A title but that achievement barely registered at a club that had eaten chocolate cake every day for 10 years. Failure to make significant progress in the Champions League saw Sarri sacked after a single season in Turin.

Despite winning trophies and playing exciting football (but, crucially, not necessarily both at the same time), Sarri was in danger of falling by the wayside. A year out of management did nothing to dissuade this conclusion.

But Lazio took the plunge and appointed Sarri as their new manager in June 2021. His appointment was received positively by the club’s fanbase but with nothing like such fanfare as greeted Mourinho across the city.

And while Mourinho won six consecutive matches at the start of his reign, Lazio have been more inconsistent under Sarri. A 6-1 thrashing of Spezia boded well but insipid defeats against Milan and Galatasary spoke of a squad still acclimatising to their new boss.

Despite this, Sarri’s work ethic had not gone unnoticed. Local media outlets have reported that he has barely left the club’s Formello training ground since he arrived, sleeping in a room at the facility and even skipping off-campus meals arranged by his coaching staff.

And victory in the derby will buy him more credit with supporters than all of his hard graft has achieved to date.

Sergei Milkenovic-Savic pulled the strings in midfield and headed Lazio’s opener after barely 10 minutes of play. Further goals from Pedro and Felipe Anderson sealed a much-needed victory for Lazio and left the Italian press falling at Sarri’s feet.

Incredible pass from Luis Alberto to start the counter 🤩

Immobile shows some serious pace to put it on a plate for Anderson
👏 pic.twitter.com/P1H4vHFSUD

Corriere dello Sport referenced the ‘excitement and controversy’, and quoted Sarri as saying: “So satisfying, we hope that we’ve found the right path.”

Tuttosport hailed the spectacle as a ‘festival of goals’, while La Gazzetta dello Sport praised the former Chelsea and Juventus boss as ‘special’ and ‘eagle-eyed’.

Which brings us back to Olimpia. “She sleeps close to my room at the Formello training ground, so I hear her sometimes,” smiled Sarri on DAZN.

He has reason to smile. Sarri finally seems to found a club that suits his idiosyncratic personality and can set his sights on bloodying the noses of the Serie A establishment.