With one mazy dribble, Reiss Nelson came out of the shadows at Arsenal 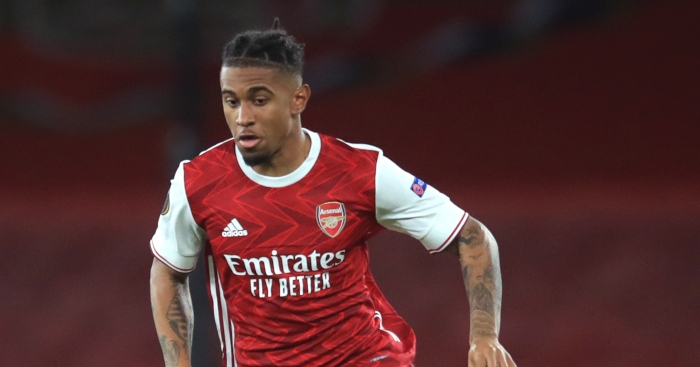 Reiss Nelson may not be getting loads of minutes in an Arsenal shirt this season, but when he does get on the pitch, he seems determined to do all he can to catch the eye.

That was certainly the case when the Gunners faced Dundalk in the Europa League, a game they would go on to win 3-0.

While the Gunners academy graduate didn’t record a goal contribution in the game, he was a direct threat for the Irish outfit’s defence to deal with, as he attempted four dribbles, completing two, while also making two key passes.

The way he went about his attacking movements was very easy on the eye, and one dribble really caught our attention.

He showed great ability to initially dance his way past Gregory Sloggett, throwing him well off course with a convincing step over before dynamically running the other way, leaving the Dundalk man doing all he could just to stay on his feet.

Having seen the Arsenal number 24 take a big touch out of his feet, the burly centre-back Brian Gartland clearly thought he had a chance of winning the ball back.

That thought was soon put out of his mind, as Nelson shifted the ball around him in a way that was far too quick for him to deal with, leaving the 33-year-old standing as stiff as a pole.

Given the quality that had just been shown to beat those two men, it would have probably been tempting to try it again when another Dundalk man came along – everyone has got a nose bleed playing five-a-side where they’ve overindulged a little, before being berated by their teammates because they should’ve passed the ball.

However, there is a quality in itself in knowing when something good needs to come to an end. Nelson is no five a side player and showed that when he took the decision to take the simple – and smart – option by laying the ball off to a teammate.

This decision rounded his run off nicely, also meaning that possession was still intact at the end of it.

He’s not had too many opportunities this season or last, following his spell on loan at Hoffenheim in 2018-19. This need for patience may continue for now, as he is behind the likes of Pierre-Emerick Aubameyang, Nicolas Pepe and Bukayo Saka in the pecking order.

However, with the Gunners having failed to score in both of their last two Premier League games, they could use somebody who is going to show the ability and nerve to take people on and make things happen.

It may have only been against Dundalk, in a game that was comfortably won, but Nelson used the opportunity to give Mikel Arteta a timely reminder of his incredible abilities.