With one pass, Liverpool’s Naby Keita made Leicester forget everything 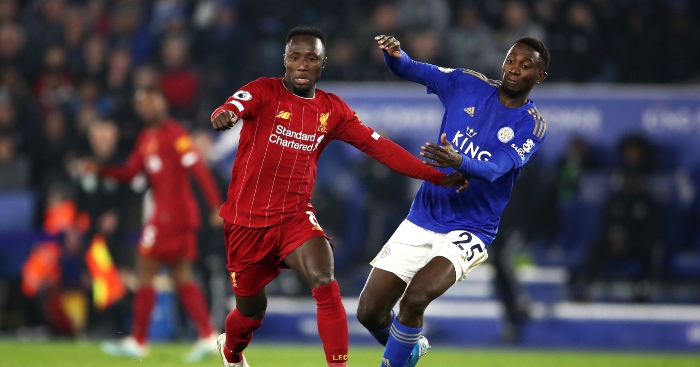 Liverpool‘s trip to Leicester City was supposed to be a potential banana skin in their title charge. Even before the goals started flowing, Naby Keita showed us the Reds were determined for that not to be the case.

With Jurgen Klopp’s team returning from two tough games at the Club World Cup to take on their closest challengers, and doing so without the injured Alex Oxlade-Chamberlain, it was supposed to be a test of whether they were great or simply good.

And, while Trent Alexander-Arnold stole the show with a goal and two assists, Keita reminded us in one first half moment that there is absolutely no weak link in this frighteningly good squad.

The two passes laid on by Alexander-Arnold for Roberto Firmino’s goals were more or less inch-perfect, but – not to take anything away from them – they’re the sort of thing he’s shown he can do time and time again.

Keita’s through-ball to Mohamed Salah at 0-0 might not have resulted in a goal, but it certainly fits that description.

The moment Keita carries the ball out of defence, he knows exactly what he wants to do. Which is all the more impressive when it’s hard to put into words what he actually does at the end of it.

His mind isn’t just working at a level above his peers, but a level above anything to which you can grant a description made up of words and phrases you’ve used before when discussing football.

It feels like he is adopting a golfer’s brain, finding every way possible to slot the ball through a tiny gap en route to its destination, imparting layers of spin and accuracy you didn’t even know existed.

However, in such a situation, all you can do is land the ball on the green within a few feet of the hole. To assume that leads to an automatic birdie would be naive, as Salah showed with his heavy touch to make the achievable impossible.

Naby Keita definitely getting into his groove now. Added real drive to the midfield, stepped up and seized possession and always looked to make something happen last night. Looking more and more like the Keita he was at Leipzig.

A pass like this has a dual effect: it can set up a great chance, sure, but it can also serve to remind your opponents how unsafe they should feel at all times.

Leicester’s defence has been one of the finest in the Premier League this season, with the Foxes going into their meeting with Liverpool boasting the joint fewest goals conceded of any team in the division.

The combination of Jonny Evans and Caglar Soyuncu in the middle, flanked by Ben Chilwell and Ricardo, was threatening in attack and borderline impenetrable at the other end. And yet, within an hour of Keita doing his thing, they were thrown entirely into chaos.

It’s as if his pass helped break the mystique, reminding that back four of their own inherent fallibility – at least for the remainder of the 90 minutes. It gave them a sense of, “Wait, if we were wrong about being able to shut him out, what else were we wrong about?”

Sometimes you don’t even need to arrive at a conclusion – the pervasive self-doubt can knock you off-balance before you’ve even got that far.

Naby Keïta completed more take-ons (4) than the entire Leicester City team combined in the first half (3).

Dancing in the middle of the park. 💃 pic.twitter.com/lW8EhjrfGD

Whenever a team has stepped up to face Liverpool this season, they have done so in the knowledge that stopping just one element of the Reds’ team will never be enough.

This approach ensured weaker teams could essentially shit their pants in the centre circle before kick-off, but it also allowed those towards the top of the table to trust in their own solidity and their own strengths all over the pitch to, if not combat Klopp’s team, at least give it a bit to think about.

With his pass, a defence splitter both literally and psychologically, Keita has waited for the Foxes to throw away their spare set of underwear before reminding them where they stand, and that’s only going to serve to make things extremely messy.

Brendan Rodgers’ squad can come back from this in their next match, but the memory will continue to nag at them until the end of the year.