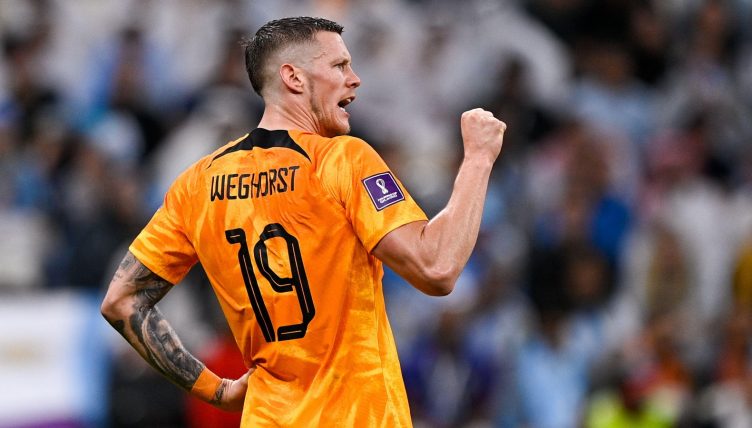 You know what we’re talking about; in the final minute of the quarter-final between the Netherlands and Argentina, which had been a slow-burner before turning into an aggy classic, Weghorst controlled that free-kick from Teun Koopmeiners and slotted home an equaliser.

Cue bedlam. Cue billions around the world bowing down in worship of their newest deity. When humans eventually wipe themselves out, the next dominant species will whisper the name of Wout Weghorst with awe.

What an impact substitute Wout Weghorst was today!!

With 2 late goals, he came so close to pulling off the comeback with the Netherlands! 😲🇳🇱#ITVFootball | #FIFAWorldCup pic.twitter.com/FP91nbJ0fc

But the best thing about this instantly iconic moment from Manchester United’s newest signing? He’d done it before.

Prior to his World Cup heroics, Weghorst had confounded expectations at Wolfsburg, arguably the Bundesliga’s perennial overachievers themselves.

He finished his first season in Germany with 17 goals, becoming the third-highest scorer in the 2018-19 season, and went on to score 59 goals in Lower Saxony.

None were as inventive, or in keeping with Weghorst’s relentless quest for self-innovation, than his effort against Arminia Bielefeld in 2020.

All the hallmarks of his Argentina-defying strike were present; somehow lurking undetected despite his 6ft 6 frame, a defence-deceiving pass from Max Arnold and an ice-cool finish that suggests his veins are full of Slush Puppie.

Above all else, it speaks of Weghorst’s footballing intelligence. Plenty of self-confessed goal poachers, especially those with the 30-year-old’s frame and record, would happily let themselves be utilised as a one-dimensional target man.

But showing the willingness to go that extra mile in an effort to out-fox defenders? We’ve not seen such cult hero potential in a short-term Manchester United signing since Henrik Larsson pitched up at Old Trafford.

“I think [Erik] Ten Hag sees what I do in him: that he is incredibly motivated,” Joop Gall, Weghorst’s former coach at Emmen, told The Guardian.

“The rest of the players have to follow that, otherwise they will look lazy, so they have to keep up. Ten Hag will want the players to look at him, knowing he is a real pro showing he is getting the maximum from his own ability.

“United is at the maximum of his ability and I have to compliment him for that. He did this himself because he invested so much in improving.”

It’s certainly interesting, at face value, that United have pivoted towards a striker that only scored twice in 20 league appearances for Burnley last season.

The temptation to believe Sean Dyche thought he was signing the target man of his wildest fantasies, only to discover Weghorst preferred kicking to heading, is extremely alluring.

But Weghorst can offer United the much sought-after quality of depth. Even if his spell at Old Trafford is a failure, by simply not being Marcus Rashford or Anthony Martial, Weghorst will offer relief for a squad that’ll feel the bite of fixture congestion in a season that’s not even halfway through.

There’s every chance the Dutchman’s time at United will much more romantic though. Blessed with quick instincts, and an even quicker brain, Weghorst has nothing to lose and plenty to gain from this unexpected liaison.