Listen up Van Gaal: Xavi Simons is a no-brainer for your World Cup squad 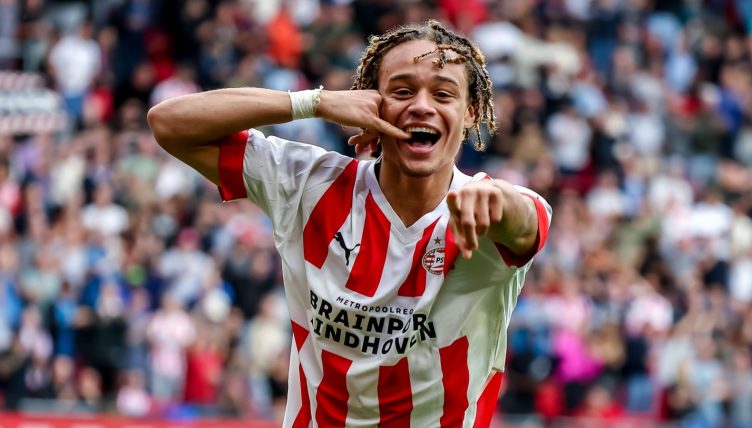 Seasoned football watchers will be gleefully ticking off various items on their World Cup bingo cards as the tournament grows ever closer.

There’s already been a shortage of Panini stickers in Argentina, forcing the government to step in and increase the supply of the coveted rectangles.

And there’s also been a glut of injuries ruling elite players out of participating in Qatar; Diogo Jota, Reece James & N’Golo Kante have joined Paolo Dybala on the sidelines in the last week alone.

But there’s also the fascination over who’ll be the late bolter whose form in the preceding months catapults them into World Cup contention. Xavi Simons, in a just world, will be strutting his stuff in Qatar next month.

Simons recently made his debut for the Netherlands U21 side but a place in the full squad for Qatar next month is in sight for the former Barcelona and PSG talent.

The 19-year-old has eight goals for PSV in the Eredivisie this season and he admitted after scoring twice against Utrecht on Sunday that he was dreaming of playing in next month’s festival of football.

Speaking to Veronica Offside, Jan Boskamp said he would take Simons to Qatar, “He thinks much faster than other players. That is really not normal. You can really see that he has trained with great players (at PSG with Lionel Messi, Neymar, and Kylian Mbappe), you name it, really fantastic.”

Wim Kieft agreed, “Simons is a really good player. And when you make such a selection, you always look like: can I bring one or two that can do something.”

Simons has proven to be a huge goal threat as his intelligent movement and the ability to get into good attacking areas have been well-understood by his team-mates, contributing to his fine start to the season.

It was immediately apparent that Simons would dissect Eredivisie defences with the expert precision of a scientist dismembering a dead frog. Against Ajax in the Johan Cruyff Shield, with PSV leading 4-3, the youngster received the ball in the opposition penalty area and motored forward.

Playing a one-two that left the Ajax defence more helpless than the poor under a Tory government, Simons rounded the goalkeeper and slotted the ball home in the same moment. The starboy had announced his arrival with aplomb.

Xavi Simons with his first goal for PSV. Wonderkid 🤩 pic.twitter.com/cWGwaWNimx

And the goals have kept coming. While Simons isn’t necessarily the quickest or most athletic player, he’s able to make the most intelligent lateral runs to outfox defenders and make him a very slippery customer to handle.

Utrecht were the latest victims of Simons’ prodigious talents. The La Masia product had already scored and provided an assist before beating the opposition’s offside trap with an expertly timed run.

Don’t listen to the pessimists who’ll tell you Simons failed to convert the one-on-one chance; the vast majority of players wouldn’t have been able to envisage the potential opportunity, never mind creating it for themselves.

Besides, he scored the rebound anyway. No wonder he’s the only teenager to be involved in over 10 goals in Europe’s top seven leagues this season.

To put that statistic into context, Simons has already had a hand in more goals this season than Antony did last season for Ajax, and he earned the summer’s biggest transfer to Manchester United. The boy is dripping with potential.

It’s no surprise that PSG, who have included a buy-back clause in Simons’ contract, are reportedly interested in bringing him back to France next summer.

“There’s a clause in my contract: if I want to go to PSG at the end of the season, I can do that for a certain amount,” Simons recently said. Real Madrid are also rumoured to be circling with intent.

“To be honest, it’s not in my head to leave PSV,” he continued. “I feel good here and I’ve just settled in. I think you can see that on the field.”

Whatever the future holds for Simons at club level, it’s patently clear that he should be on the plane to Qatar. Louis van Gaal is a manager that always entrusted youth provided they are talented enough and Simons surely fits the bill.

The Dutch squad is already a talented one, although perhaps not on the same level as Brazil and France, but the inclusion of Simons could be a game-changer.

International matches are often tight affairs decided by a moment of individual brilliance. With that, and the element of surprise he’d possess against World Cup defences, the decision to put Simons on the plane is arguably the easiest of Van Gaal’s career.