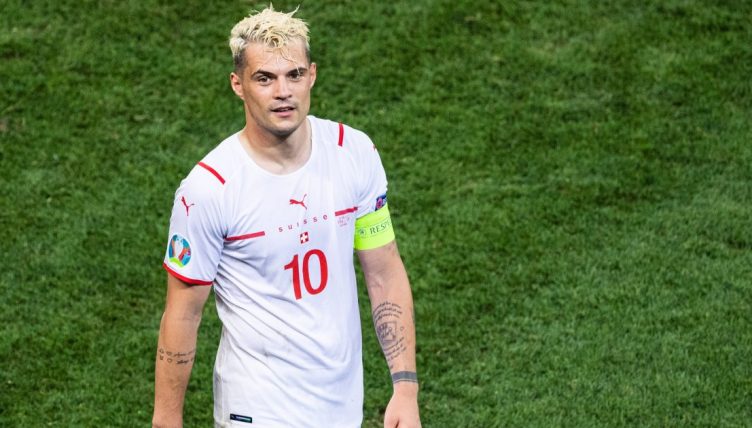 Football may or may not be coming home, but it’s certainly back where it’s meant to be, played in front of thousands of fervent fans, with the players putting millions more at home through the ringer.

On Monday, we witnessed one of the most thrilling days of tournament football in living memory. Two brilliant, dramatic acts on the grand stage.

These occasions are where the big players make themselves great, where reputations are solidified and plated in gold, where men like Granit Xhaka lift their teams to feats greater than anyone thought possible.

On one of the greatest days of knockout football in history, one that provided us with 240 minutes of gripping end-to-end action, 14 goals and a shootout in which one of the most expensive players in history made himself the villain, Granit Xhaka – that Granit Xhaka – was the standout performer.

The way he reacted tells you all you need to know. Presented with his Star of the Match trophy after Switzerland’s dramatic penalty shootout victory over neighbours and tournament favourites France, the Arsenal midfielder had four words to sum it up: “It’s fucking amazing, man.”

He apologised, but he needn’t have. It was fucking amazing, all of it. And after the couple of seasons he’s had at club level, after all the stick he’s got, it must have felt even more so.

Xhaka had dominated a midfield that was supposed to be the stomping ground of the Euros’ best player, Paul Pogba, and everybody’s favourtie omnipresent, match-dominating football dervish, N’Golo Kante. Then, in the dying seconds of normal time, it was he who had laid on his country’s equaliser with the most immaculate and incisive of through balls – a moment that summed up a 120-minute masterclass.

With just 20 seconds of the 90 minutes remaining, and his nation 3-2 down, the Arsenal midfielder found a pocket of space in the centre circle, looked up and saw Mario Gavranovic advancing ahead.

With that left foot – that left foot that we all know can produce magic if allowed the time and space – he measured a perfect pass into the Dinamo Zagreb forward’s feet. Gavraonvic turned, shot and the Swiss had turned the momentum back in their favour.

That initial momentum had slipped half an hour prior with Karim Benzema’s brace after Ricardo Rodriguez’s missed penalty. Fifteen minutes after that, when Paul Pogba swung his own magical boot to make it 3-1, the game looked unrecoverable, from the outside at least.

But Xhaka had not stopped believing, as he told Swiss newspaper 20 Minutes after the final whistle: “I think something happened around the 65th, 68th minute of play. Before Pogba’s goal. I met Yann Sommer’s gaze and we said to ourselves that we had to wake up. I told him he had to move his defenders a bit.

“Of course we are down 3-1 against France and many would have thought it was over. But me, and it’s not arrogance, I knew that if we scored 2-3 we could do it.”

They did score and they took it to extra time, a period of extra time in which Xhaka only seemed to grow in energy and stature. His passing was perfect, his tackles robust, his interjections timely and his steely composure as those around him lost their heads a turn up for the books.

All eight of his long passes reached their targets. He played Switzerland into the final third of the pitch 17 times and created three chances. He won two aerial duels as well making three interceptions and two clearances.

“He was exceptional, all his choices were good,” Arsene Wenger said on beIN Sports. “He was the one who rallied the troops before the penalties.”

This was the player that Wenger thought he was signing for Arsenal back in 2016, one about whom – given his reportedly imminent move to Jose Mourinho’s Roma – Arsenal fans may now have conflicted emotions, if indeed they did not already.

You can throw all the abuse and cirticism you want at the midfielder, but you cannot deny one thing: Xhaka is a fighter, and he led Switzerland to battle back in this game in the same way that he has battled back from adversity at his club.

Xhaka continued: “It’s an incredible story, when you think about it. I still suffered a lot during my career. I have been criticised a lot, I have received praise too.” More of that praise will come now, and it is fully deserved.

The only blemish on the night was a yellow card that will see the 28-year-old sit out the quarter-final meeting with Spain.

His leadership and passing range is irreplaceable so Switzerland will miss him dearly. Might Arsenal feel the same next season?