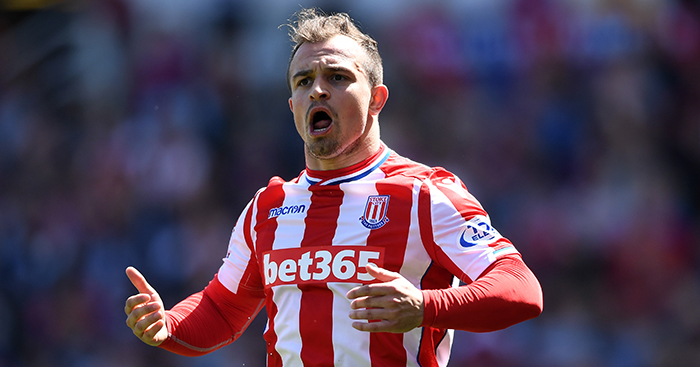 Not all Liverpool fans are convinced about the merits of signing Xherdan Shaqiri from Stoke City, but to truly appreciate the Switzerland star the focus must be on what he does do rather than what he doesn’t.

The Reds have signed Shaqiri on a five-year contract to provide competition for their front three next season, making the most of the 26-year-old’s cut-price fee following Stoke’s relegation from the Premier League.

Having contributed an impressive eight goals and seven assists last season, both of which were squad bests, Shaqiri’s reputation certainly wasn’t harmed by the Potters’ demise.

Anything but. In fact, his combined total of 15 direct goal contributions placed him 15th in the entire division, making him an attractive proposition for a knockdown fee reported to be an initial £13million.

Shaqiri’s average of 2.1 chances created per match was actually better than anyone in the Liverpool squad following the sale of Phillipe Coutinho, but as is often the case when it comes to judging players in the UK, the focus ever since the link first surfaced has tended to be on what he doesn’t do.

For Shaqiri, that is apparently a lot of defensive work.

But while it is understandable that fans and pundits will want to debate the pros and cons of every potential signing, it’s safe to assume Klopp knows full well what Shaqiri’s strengths and weaknesses are and has in mind exactly how he will utilse the attacker.

During his three seasons at Stoke, Shaqiri was used mainly on the right, but that was only nominally his position. More often than not, he would take up positions in the centre of the pitch, making himself hard to pick up and helping to create overloads.

Defensively, it often meant he wasn’t able to track back down the flank as the opposition broke, but it wasn’t a case of him being out of position. The system was devised to give him a free role and relied on a central midfielder shifting to the right when necessary.

The likelihood is that, as their talisman for many years, Shaqiri is afforded the same luxury in the Switzerland team, making criticism of him for apparently failing to track Coutinho for Brazil’s goal in their World Cup opener moot. It almost certainly wasn’t his job.

But that is kind of the point. As fans and even pundits, we can only speculate on exactly what instructions a player has been given by his manager and whether or not he has followed them.

It should be noted that only Valon Behrami made more combined tackles and interceptions than Shaqiri for the Swiss during that Brazil game, but rather than do Klopp’s worrying for him, Liverpool fans ought to focus on what they know for certain: that Shaqiri is capable of the sublime, the thrilling and the wonderful.

Any good centre-forward will tell you that all goals are equal, but this, of course, is nonsense. And Shaqiri knows it. After all, nobody wants to watch a highlights reel of tap-ins.

Five out of his eight goals for Stoke last season were scored from outside of the box. In fact, only Coutinho (whose name keeps cropping up) has scored more in the Premier League over the past two campaigns combined.

Seriously, who cares if a player’s average distance per match is 0.5k down on someone else’s if he can guarantee you a few bangers a season? This is what being a football fan is all about, isn’t it?

He’s even got a celebration that’ll annoy yer da’.

After he’d scored against Brighton in February, Stoke’s former left-back Mike Pejic, 68, said: “Great to see Xherdan Shaqiri scoring the equaliser, but not so great watching him indulge in his goal celebration as he posed to the crowd as if to say ‘I’m the greatest’.”

Now not only was Shaqiri midway through a run of three goals in three games during a period in which none of his team-mates scored in six, it was also another from outside the area and set up by what was undoubtedly an unintentional assist. He had nobody to thank; he was doing it all alone.

But f*ck all that, the real story here is that Shaqiri joining Liverpool gives Sadio Mané another celebration to copy. And if that’s not a reason to be thankful for this transfer, what is?

Amid criticism of his work rate, it got somewhat lost in that Brazil game that only Neymar on either side created more chances than Shaqiri, who sent over the corner for Steven Zuber’s equaliser. By the metrics you’d expect a team’s crief creator to be judged by, he did just fine.

It certainly wasn’t a vintage display from the former Basel youngster, but he is the kind of player who looks to create and make things happen every time he gets the ball. He doesn’t need to run the game to win it.

His desire to provide a killer ball at almost every opportunity might upset those obsessed with pass completion statistics, but Shaqiri provides the kind of sense of anticipation you want as a fan, the feeling that moves you towards the edge of your seat.

Admittedly, four of his assists last season came via corner kicks, making his overall tally of seven seem rather less impressive, but bear in mind he was part of a Stoke team that ranked 16th for goals and 19th for possession in the Premier League.

If he still managed to create more than two chances per game in that team, just imagine how he’d thrive around the sort of movement provided by Mané, Mohamed Salah and Roberto Firmino?

Like elasticos? You’ll love Shaqiri. Few players since Ronaldinho have attempted it quite as often as the Alpine Messi, and though it doesn’t always come off – obviously – it’s this sort of adventure which makes him worth watching.

As a rule of thumb, you should want your team to sign any player that gets kids trying to copy them on the playground. And Shaqiri definitely fits that bill.

If anything, he should be even more adventurous in his play.

Admittedly, he isn’t blessed with pace, which makes it more difficult for him in one-on-ones, as does the fact he’s a predominantely left-footed player on the right, but he has the ability to have any full-back on toast and is, ironically, perhaps not selfish enough in those situations.

We want to see more of this, Xherdan.

Shaqiri is far from the perfect player. If he was, he’d have made it at Bayern. But he’s improved year-on-year in the Premier League, and the fact Bayern signed him in the first place tells you plenty about his potential.

Yes, potential: Shaqiri is still only 26. Assuming his career follows the traditional bell curve, his best years are still to come. And that is very exciting.

Don’t worry about what you’ve been told he can’t do, Liverpool fans. Because what he can do is bloody brilliant.