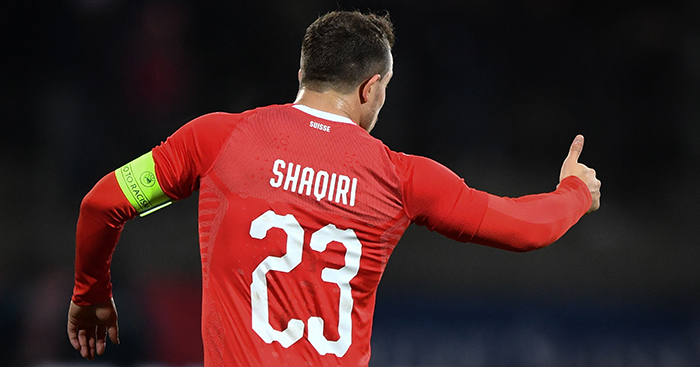 When Switzerland fell 2-0 down at home to Belgium, that was supposed to be that – but Xherdan Shaqiri had other ideas.

The hosts needed to win by two clear goals to reach the Nations League finals, which would mean putting four or more past a team that hadn’t conceded that many in a single game since 2010.

Not only that, but Roberto Martínez had tasted defeat just twice in his time in charge, and just once in Belgium’s last 30 games.

You probably wouldn’t have rushed to use a Bet365 offer to back a turnaround, but there’s no accounting for what Shaqiri can do when the pressure is really on.

He set up the equaliser for Haris Seferović with a lovely cushioned header back across goal, and it was his wonderful cross that Nico Elvedi converted to put the Swiss in control for the first time as 0-2 became 4-2 in the space of 45 minutes.

Switzerland required someone to step up, and Shaqiri had once again taken on the mantle.

Shaqiri is different to most players of his ilk, and not just because watching him in action looks like someone has attached Jimmy Grimble’s magic boots to a piece of carry-on luggage.

Even with the best and most talented players, there’s an air of familiarity to their movements which you just don’t see with the Liverpool man – and that element of unpredictable genius would arrive later in the victory over Belgium.

With just six minutes left on the clock, and with the home side knowing just one goal from the visitors would cost them a place in the Nations League semi-finals, it might have been tempting to take the approach of “what we have, we hold”.

It certainly wouldn’t be smart to play in a team-mate with a hopeful backheel which nine times out of 10 would gift possession to the opposition and leave your right wing-back stranded upfield.

If you’re Xherdan Shaqiri, you justify yourself by deciding that’s what they want you to think. And you do this.

When Liverpool added Shaqiri to their squad over the summer, there were a few nay-sayers purely based on the fact he had spent the previous season getting relegated with Stoke City.

Others, however, may have looked at that outcome and the quotes from Charlie Adam about the Swiss winger not doing enough, and decided that particular piece of criticism made them love him even more.

At the very least, most doubts ought to have been assuaged in pre-season, when he scored his first goal for the Reds in a pre-season meeting with Manchester United.

The bicycle kick against United was struck so sweetly it feels as if it could have been taken out of a video game advert; the contact so clean it feels as if, while other players spent their childhood years stood up kicking a ball against a wall, young Xherdan practiced contorting his body and flying through the air before landing on the harsh tarmac floor with such regularity the pain eventually stopped registering.

In a piece for The Players’ Tribune around the 2018 World Cup, Shaqiri recalled being sent back to play for Basel’s second team after spoiling his first-team chance by dribbling too much.

Some will interpret this as your classic example of a young player getting overexcited on his debut, but the other way of looking at it is to realised Shaqiri has never done what was expected of him. Criticism doesn’t mean the thing he’s doing is wrong, it just means he needs to do it better.

The idea of an impossible angle is another thing which doesn’t exist for him, for example – it might be impossible for others, sure, but for him it just means he needs to try harder.

We saw this over the summer at the World Cup, where he put enough whip on a shot from wide right that it ever-so-nearly curled back at the last moment to beat Serbia goalkeeper Vladimir Stojković – it looks stupid to even try, but then you’re reminded of the goal against Honduras at the 2014 World Cup which was little more than a variation on that theme.

While similarly gifted Arjen Robben has a knack of finding space on his left foot in the time it takes you to blink, Shaqiri’s talent comes from his ability to find somewhere to place the ball at the moment you think “sure, he’s on his left foot, but there’s no real danger”.

With Xherdan Shaqiri, there is no such thing as ‘having him right where you want him’, because the place you want him is invariably where he wants to be himself.

This is a man who has forever thrived on proving others wrong, so any semblance of a challenge is just playing into his hands.

Worryingly, though, you can’t even give him a wide berth in the hopes he’ll tire himself out. Because when you do that, this is how he’ll respond.

Can you name every Swiss player to appear in the Premier League?