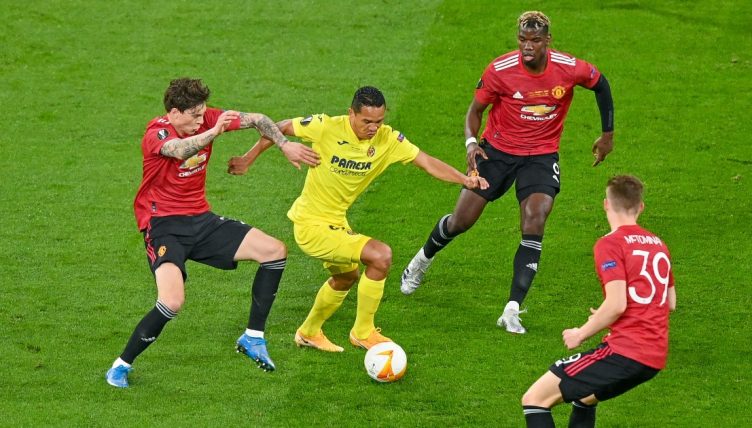 You could be forgiven for thinking Manchester United were playing themselves in this year’s Europa League Final such was the discourse across the British media.

BT Sport assembled their finest United 5-a-side team in the punditry box with Rio Ferdinand, Paul Scholes, and Owen Hargreaves all in place to describe the expected triumph.

Their opponents Villarreal were largely written off as the ‘seventh-best team in Spain’ rather than an experienced and wily team managed by Europa League specialist Unai Emery.

Coupled with the presence of Premier League alumni like Etienne Capoue, Juan Foyth and Alberto Moreno in their ranks, it was assumed that Villarreal were simply happy to participate in their first-ever major European final rather than have any realistic chance of stopping United.

But, on a wet and mild night in Gdansk, the La Liga side produced a tactical masterclass to secure a 1-1 draw before emerging victorious in a dramatic penalty shoot-out.

It wasn’t much of a spectacle in truth – the two teams mustered three shots on target between them and the temptations of The Great British Sewing Bee grew more attractive with each passing minute.

But a disciplined and committed Villarreal still managed to produce the game’s major moment of sauce courtesy of a certain Carlos Bacca.

Bacca’s continued presence in European football has somewhat slipped under the radar.

The 34-year-old rose to prominence during a prolific spell at Sevilla between 2013 and 2015, scoring 49 goals and representing a freewheeling Colombia side at the 2014 World Cup.

His transfer to Milan was the classic case of the right player at the wrong time. The Italian giants had entered a period of decline and, while he still chipped in a healthy number of goals, Bacca was constantly played out of position and attracted criticism from the Milan fans for his perceived lack of effort.

A move to Villarreal suited all parties but, in keeping with the strangely low-profile nature of the club, Bacca became something of a forgotten man. His appearance on the team-sheet in Gdansk would have produced a collection of double-takes and, ‘Oh, didn’t realise he was still playing,’ moments amongst neutral supporters.

Bacca was quiet during the game’s opening period until a botched clearance by Aaron Wan-Bissaka presented an opportunity to remind everybody of his immense talent.

Upon collecting possession on the outskirts of the United penalty area, many footballers would simply have stuck the ball back where it came from in the vague hope of creating a chance.

Yet Bacca has never been a footballer to stick to conventional notions of playing the game. Trailed by Wan-Bissaka and Marcus Rashford, the forward produced a feint to send Rashford crashing into the Baltic sea.

Wan-Bissaka, who has established a reputation as a tough-tackling defender, did everything right; he stood tall, failed to commit to any rash challenges and quickly whipped out his leg in an effort to block whatever Bacca had in mind.

But, like Sherlock Holmes investigating Homer Simpson, the Colombian was always two steps ahead.

Contorting his legs while just about keeping his balance, Bacca executed a rabona cross that would have made Erik Lamela clap in appreciation. It was so filthy that attempts to upload a clip to the internet contravened plenty of Not Safe For Work warnings.

Foyth wasn’t able to keep his headed effort on target but that is beside the point.

Like deep house troubling the Top 40 and Tim Sherwood as a viable top-flight manager, Bacca was a concept that seemed to exclusively belong to the mid-2010s.

But his moment of skill was a timely reminder that life exists outside of the confines of the Premier League and Champions League.

The deferential dictator: Marcos Senna and the blossom of Spain’s golden age