‘You are not a p*ssy, no?’: Tadic wins at sh*t-talking after Ajax v PSV chaos 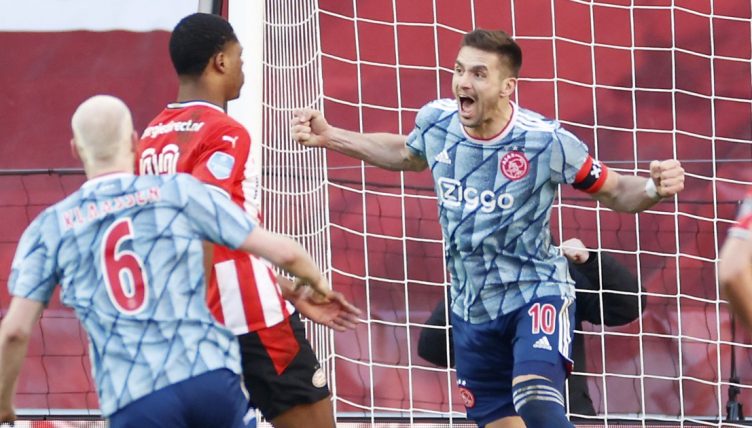 Post-match interview questions, for the most part, are fairly bland inquiries that draw out fairly bland responses.

What did you make of the referee’s decision? Do you feel your performance deserved more than a point? Do you prefer watching paint dry or grass grow?

Yet on Sunday in Eindhoven, bland would not do. It would not have lived up to what had come before. Faced with Dusan Tadic after a game that had seen a wild last few minutes, the Dutch TV reporter followed the obvious, if a slightly provocative, line of inquiry: “But you are not a pussy, no?”

Tadic grinned. He knew it was coming.

Half an hour earlier, he’d been front and centre of the incident that elicited the question.

PSV were leading Tadic’s Ajax 1-0 and the game was running into injury time. PSV were on the verge of a vital win. They had started the day second in the league, six points behind their visitors. These were going to be the three points to keep them in the race for the title.

But Ajax got one last chance in a goal-mouth scramble. Davy Klassen prodded the ball towards the target.

PSV right-back Denzel Dumfries was there and, desperate to hang on to the three points, had no other option.

Suddenly possessed by the spirit of Steven Taylor, Dumfries threw his arm up and into the path of the ball, before flopping to the ground like a gunned-down henchman in a 1970s Bond film. There he lay, holding his face and writhing in apparent agony.

The ref was not fooled. Seeing through the act like an eagle-eyed casting director, he pointed to the spot.

But Dumfries was not done. In fact, he had only just begun.

As Tadic held the ball and waited to take the kick, Dumfries ambled up to the Ajax winger, started digging up the spot with his studs, and looked the Serb straight in the eyes. The shit-talking began.

The ref ushered Dumfries away and Tadic converted. Yet instead of celebrating with his team-mates and letting bygones be, Tadic wanted a bit of revenge. He ran straight to Dumfries to rub it in and say a few words of his own.

Inevitably, a fracas ensued – both players held back by team-mates as they pretended they wanted to fight each other.


Perhaps fortunately, it was the last act of the game. Tadic had secured the draw and Ajax are now in pole position to reclaim the title.

Thirty minutes later and a bit cooler, there stood Tadic, ready to explain the situation. “But you are not a pussy, no? Dumfries has said that to you?”

Tadic laughed as he replied: “Of course. I put ball [down] to shoot penalty, and three players come to make hole. They were really kicking the pitch. He come to me and say that I am pussy and that I am not leader and that I will miss penalty.

“Of course, when you score goal, you tell him also bad words back… you cannot say, ‘Thank you that you tell me that I’m pussy.’ It’s not possible!

“Probably I tell him something in Serbian, because in Serbia we have too many bad words. We could write 200 books [of bad words]!”

Dusan Tadic explaining the incident between him & Dumfries in his own style 😂👏 pic.twitter.com/86DgVUObVv