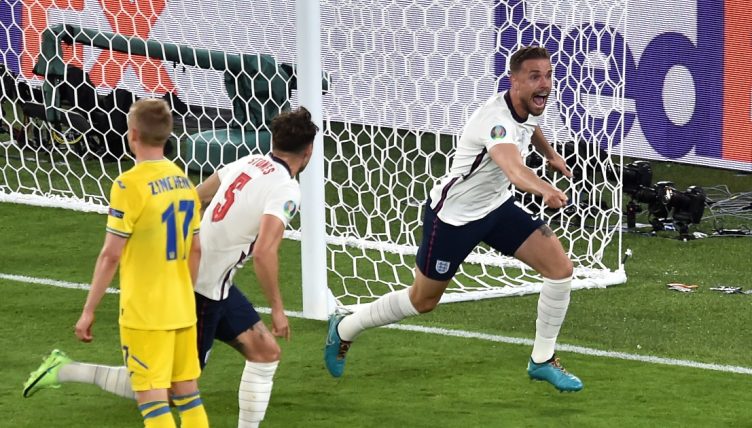 With a flick of Jordan Henderson’s head, England had qualified for the semi-finals of Euro 2020 in such drama-free fashion that it felt like a different footballing universe.

No penalty shootouts, no red cards, not even a single goal conceded in five matches. A pessimist might say that it only means all the drama will come at once, the Three Lions bowing out against Denmark in a shootout following a chaotic 4-4 draw and three dismissals.

But it just doesn’t feel like anything of the sort will happen. Gareth Southgate’s England seem like a side who know they are in complete control of their own destiny. The fact that it is yet to hamper their performances is a testament to his management.

So when Liverpool‘s captain, on as a substitute, escaped the attention of Ukraine’s defence to head home Mason Mount’s corner to score his first England goal to make it 4-0, it felt like the most natural thing in the world.

But it was another moment from Henderson around 20 minutes later that truly symbolised the unburdened nature that Southgate has his team playing with as well as their rapidly increasing confidence. The support of the country has been firmly thrown behind them, not on top of them.

As Andriy Shevchenko’s side completed a rare foray into the England penalty area, Henderson came across to cooly intercept a pass and set Jadon Sancho scampering away on a counter-attack, pulling off an outrageous backheel and completely taking three Ukrainians out of the game in the process.

You can tell England have captured that freedom and swagger necessary to win a major tournament when Henderson, a man who perhaps embodies Southgate’s alluring brand of pragmatism more than anyone else, is attempting backheels in his own penalty area.

A cursory glance at social media on Sunday morning will reveal a raft of England fans speculating on how it will all go wrong against Denmark. Thomas Delaney will apparently boss Declan Rice and Kalvin Phillips on his own, while Joakim Maehle will put in a display that will all but retire Luke Shaw from the game.

But will any of that really happen? Confidence and cohesion among the England camp are multiplying with every passing day. It is in the nature of football fans to pontificate on how everything will go wrong. But more and more this feels like one of those times when it just won’t.