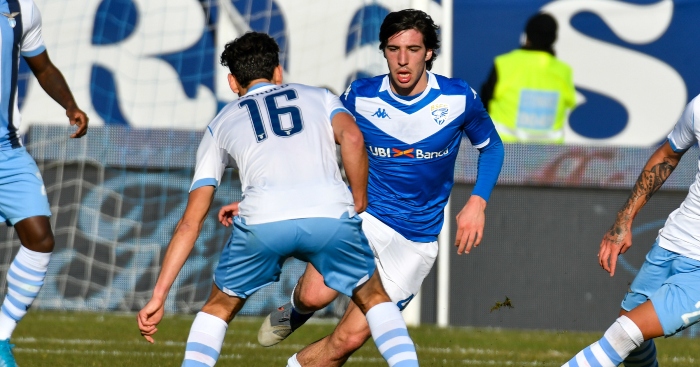 Sandro Tonali’s name already frequents gossip columns on a regular basis, and you’re going to be hearing an awful lot of his name this month – and for good reason.

Search Tonali’s name on Google and you will quickly find links to Juventus, Inter, Real Madrid, Barcelona, Atletico Madrid, PSG and Manchester City. Given the 19-year-old midfielder was called up to Italy’s senior squad while still playing in Serie B for Brescia last season, it’s no surprise he is being hyped up.

Playing for a club owned by Massimo Cellino can only help, with the former Leeds United owner saying in October: “All the big Italian clubs are interested. Abroad there’s Atletico Madrid, Paris Saint-Germain and Manchester City, but in my view, he’d be better off remaining as a protagonist with Brescia.

“The other day, his agent and his parents were telling me about this €50million evaluation. I replied that for me he is worth €300million, which means I don’t want to sell. I have a dream. If Sandro accepts, I am ready to make a big financial sacrifice to extend his contract.”

It’s hard to cut through the hyperbole with Tonali. To go with the heady valuations and links to some of the biggest clubs in Europe, the teenager has also been dubbed a mix between Andrea Pirlo, Gennaro Gattuso and Daniele de Rossi. No pressure, fella.

But the excitement around Tonali is for good reason: he’s really bloody good at football.

The comparisons with Pirlo are easy to understand. Both deep-lying playmakers to start their careers at Brescia, the duo are physically similar, owing most obviously to a hairstyle that would look inherently wrong on any man not from Italy.

And if Tonali really wanted to avoid comparisons with Pirlo, he shouldn’t have scored his first Serie A goal by doing this.

Tonali has not exactly shied away from such likenings, telling Rai Sport: “It’s tough to pick one of those champions. Maybe a mix of all of them would be perfect. I guess there are similarities with Pirlo in a way, but I also put a lot of grit in there, so maybe more Gattuso.”

But in his latest appearance for Brescia, Tonali showed himself to be his own player. His side may have ultimately lost 2-1 at home to Lazio, with Ciro Immobile netting a 91st-minute winner after the hosts spent over 50 minutes down to 10 men, but the youngster tried his best to almost single-handedly carry the team to a result.

The most eye-catching moment came with the score still locked at 1-1 in the 75th minute. Tonali collected the ball in his own half surrounded by six Lazio players and nobody in the blue of Brescia to support him.

In that moment, he decided to do something neither Pirlo, Gattuso or De Rossi were noted for; he decided to take on the entire defence, swiftly gliding past players with the ball stuck to his toe. Reaching the byline before holding the ball up in a passage of play that lifted the pressure on his team-mates for a precious 20 seconds.

🙌 Sandro Tonali doesn't plan on letting any Lazio player get the ball off him!

⭐ What a talent the 19-year-old midfielder is! pic.twitter.com/jipNhysiWJ

It is this unique ability for a central midfielder to dribble past players and carry the ball forward that marks out Tonali as different; part Pirlo, part Gattuso, part Forrest Gump.

A move to Juventus or Milan is unlikely to help the youngster put a stop to such comparison to Italy’s 2006 World Cup-winning midfield, but it only seems a matter of time before he swaps relegation battles with Brescia for one of Europe’s glamour clubs.

We’re going to be hearing a lot about Sandro Tonali throughout the January transfer window, and no doubt beyond, so perhaps it’s time we start taking him on the merit of his own name.