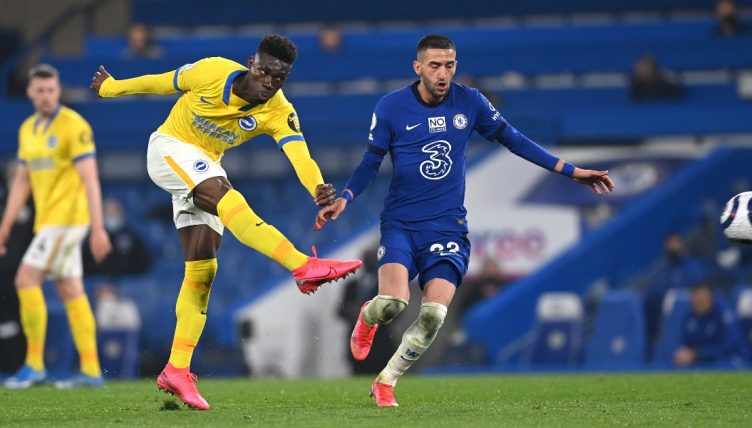 If you were transfixed on the scenes outside Stamford Bridge on Tuesday night, there is a chance you missed the latest episode of The Yves Bissouma Show taking place within it.

Of course, no one can be blamed for being more interested in the Super League protests outside the ground. Following the announcement of the closed-shop competition on Sunday night, matches suddenly seemed incredibly irrelevant. What was the point if these teams were going to earn their millions elsewhere next term?

With the Super League crumpling like a diamond-encrusted Coke can, however, we can turn our attention back to matters on the pitch while the no doubt inevitable legal wars rage on in the background.

Ironically, it is those six sides who would have truly benefited from having their gaze fixed on Tuesday night’s episode of The Bissouma Show.

If reports are to be believed, Liverpool, Manchester United, Arsenal and Tottenham all have an eye on the Mali midfielder. Despite their recent distractions, it will not take those sides long to switch their attentions back to the impending transfer window.

Has Bissouma had better performances? Sure. He completely controlled the game when Brighton welcomed Everton to the Amex a few weeks ago and has frequently shone when facing those at the top-end of the Premier League.

But the way he eased his way around a midfield unit of Jorginho and Mason Mount for 90 minutes on Tuesday is perhaps our surest sign yet that a bidding war is about to ensue this summer.

The 24-year-old flexed his attacking muscles towards the end of the first half when his positivity fashioned a goalscoring chance out of very little.

Collecting the ball on the left-hand side of midfield, the No.8 quickly assessed his options before sliding a pass to Alexis Mac Allister, who then shifted it to Joel Veltman on the right.

Yves Bissouma p90 in the Premier League this season:

Such a talent. 🇲🇱 pic.twitter.com/P5eDNg5L1i

By this point Bissouma had crept forward further and, with a quick glance over his shoulder, had evaded the attentions of both Hakim Ziyech and Jorginho.

His shot was not the best, looping onto the roof of the net with the help of a big deflection, but the positional intelligence and his coolness on the ball to start the attack will have had potential suitors wanting to both sign him and be his mate.

There is a famous scene in The Inbetweeners where the boys are at an underwhelming house party that even they believe to be uncool, only for the arrival of a popular Year 13, Charlotte Hinchcliffe, to make them suddenly declare it the coolest party they had ever been invited to.

Bissouma’s aura as the hottest midfield property in the Premier League who could realistically move this summer continues to grow, and we are probably not far away from Jurgen Klopp, Ole Gunnar Solskjaer, Mikel Arteta and Ryan Mason trying to “look cool” in a bid to win his approval.

Arsenal, Liverpool, Manchester United and Spurs all look set to finish far behind City this season, but a Bissouma-shaped summer arrival would make all of them significantly better… not to mention cooler.