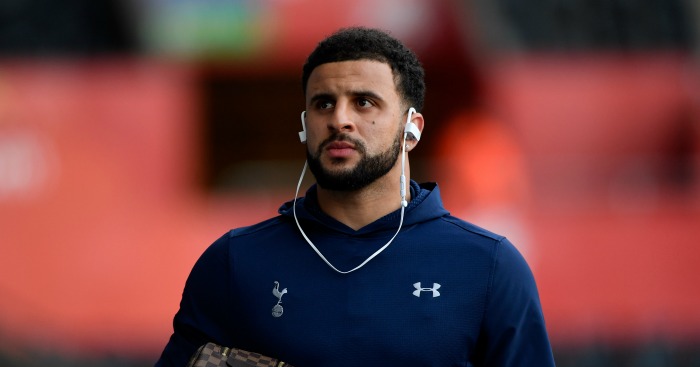 Kyle Walker, Kasper Schmeichel and Jordan Pickford are at the centre of some of Monday’s biggest football news stories.

Barcelona, Manchester United and Manchester City are all reported to be interested in signing Kyle Walker, with the right-back wanting to leave Tottenham.

According to The Independent, Walker has fallen out with Mauricio Pochettino after the manager unhappy with the England international’s fitness and displays training.

Walker was left on the bench for the North London derby and could cost close to £50million, it is said.

Kyle Walker sees his future away from Tottenham after being dropped. Story: https://t.co/57eyphDEA3

Jose Mourinho has revealed he will choose between Matteo Darmian, Michael Carrick and Alex Tuanzebe to form his central defence for Manchester United’s trip to Celta Vigo in the semi-final of the Europa League.

Mourinho has also suggested he could be forced to field an Under-23 team in the Premier League were United to reach the final.

He said: “Maybe I can bring (academy coach) Nicky Butt and his team to play against Crystal Palace, and hopefully Palace doesn’t need a game to stay in the division because it would be very, very bad if they needed the points for us to play with the under-23s. It’s difficult.”

Manchester United are leading Manchester City in the race to sign Kasper Schmeichel, according to Sky Sports.

David de Gea has been linked with a move to Real Madrid this summer and Schmeichel – who is among three of the most likely contenders to replace the Spaniard – could follow in his father’s footsteps by becoming No.1 at Old Trafford.

If De Gea did leave United, I would love to see the number 1 jersey at United display the name ‘Schmeichel’ once again #MUFC pic.twitter.com/mD0dY5XP9X

Patrice Evra is without a doubt one of the funniest footballers to follow on social media, and the Marseille left-back treated everybody to a Monday morning pick-me-up.

Renowned for regaling his followers with a song, Evra took on The Temptations – My Girl and brightened up many a Monday morning.

Magpies move a no-go for Pickford

Newcastle were among the clubs linked with a move for Sunderland’s Jordan Pickford this weekend, but it appears unlikely the goalkeeper will follow in Jack Colback’s footsteps by swapping the Stadium of Light for St James’ Park.

Chelsea in talks with Sunderland for Jordan Pickford. They want him to replace Asmir Begović.

It’s hard not to love Mario Balotelli, although PSG certainly found a way to on Sunday.

Something tells us Mario Balotelli got under the skin of PSG last night… pic.twitter.com/rSNmAIsLtP