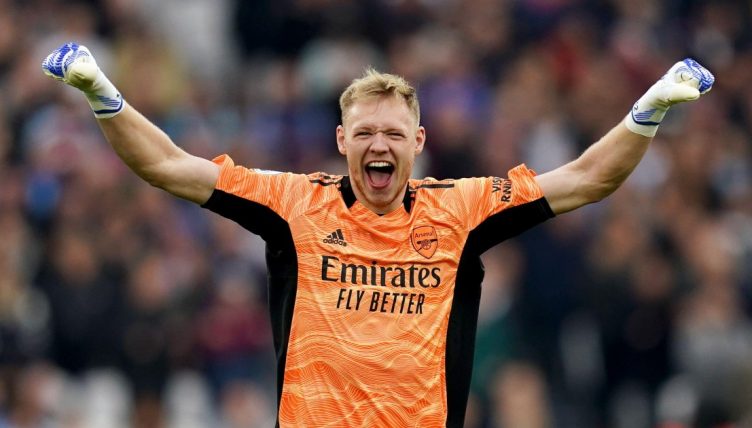 Arsenal goalkeeper Aaron Ramsdale had a hilarious sly dig at north London rivals Tottenham after the Gunners clinched a crucial three points against West Ham in their race for Champions League football next season.

Two goals from centre-backs Gabriel and Rob Holding were enough for Arsenal to edge out Europa League semi-finalists West Ham, whose attention will now turn to the second leg against Eintracht Frankfurt in Germany.

When asked whether Spurs’ 3-1 victory over Leicester earlier in the day had any impact on how Arsenal went about the match, Ramsdale had a hilarious response.

“To be honest I didn’t really know they had won,” he said, with team-mate Rob Holding smiling and shaking his head at the goalkeeper’s response.

“It was vital that we had to get three points anyway, I go out earlier to warm up so I didn’t know the result.

“Every game from now to the end of the season is vital for us if we’re to get that fourth place, or third if we’re looking even higher.”

Ramsdale has been a vital part of Arsenal manager Mikel Arteta’s rejuvenated side this season, who was backed heavily in the summer transfer market by the board despite failing to finish in any European spot last campaign.

Ramsdale, Ben White and Martin Odegaard were just some of the played brought in who have helped Arsenal in their push for top four.

They now sit fourth, two points ahead of Spurs in fifth and only three behind third-placed Chelsea.

The Gunners will face Spurs in a hugely important north London derby before the end of the season, which may well determine who will get the final Champions League spot.

Aaron Ramsdale on Tottenham winning before Arsenal’s match: “To be honest, I didn’t know they won! Every game from now until the end of the season is vital for us to get three points for that fourth place or third place if we’re looking even higher.” #afc pic.twitter.com/cl1plE3ZA7