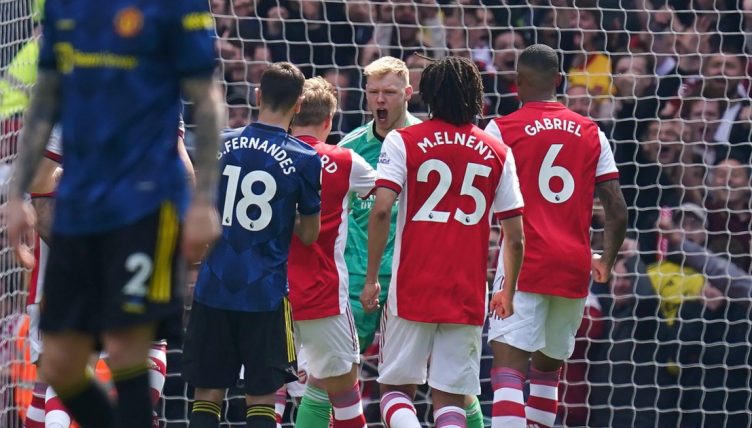 Arsenal goalkeeper Aaron Ramsdale celebrated wildly after Bruno Fernandes missed a penalty for Manchester United in their Premier League match – and his reaction was more than reminiscent of a certain Martin Keown.

And Mikel Arteta’s side raced into a two-goal lead through Nuno Tavares and a Bukayo Saka penalty, as the atmosphere at the Emirates reached fever-pitch.

But United weren’t out of the game just yet. Cristiano Ronaldo pulled a goal back before half-time and they were awarded a penalty following a careless handball from Tavares.

Fernandes decided to take the spot-kick – somewhat surprisingly considering Cristiano Ronaldo’s presence on the pitch – and his slow run-up ended up with the Portugal international pinging his effort against the outside of the Arsenal post.

Ronaldo’s reaction could be hung in the Louvre. But the real story was Ramsdale’s joyful response.

Making a beeline towards Fernandes and jumping in the air, the Arsenal goalkeeper paid a reverential homage to Keown’s infamous response to Ruud Van Nistelrooy missing a penalty in a game between the sides in September 2003.

Ramsdale is establishing a reputation as one of the game’s leading shithouses and camera footage caught him winding up Chelsea fans at Stamford Bridge on Wednesday.

As Bukayo Saka stroked in the decisive fourth from the penalty spot in injury time, Ramsdale was spotted waving to the Chelsea fans behind his goal, who had given him some special treatment throughout the game.

It’s the kind of behaviour that’s seen the 23-year-old become an Arsenal cult hero and his reaction to Fernandes’ missed penalty was mirrored by the packed stands at the Emirates.

Arsenal will be looking to beat Tottenham to fourth place and qualify for the competition for the first time since the 2016-17 season.

When it seems like it just can't get worse for Man Utd, Bruno Fernandes misses from the spot…