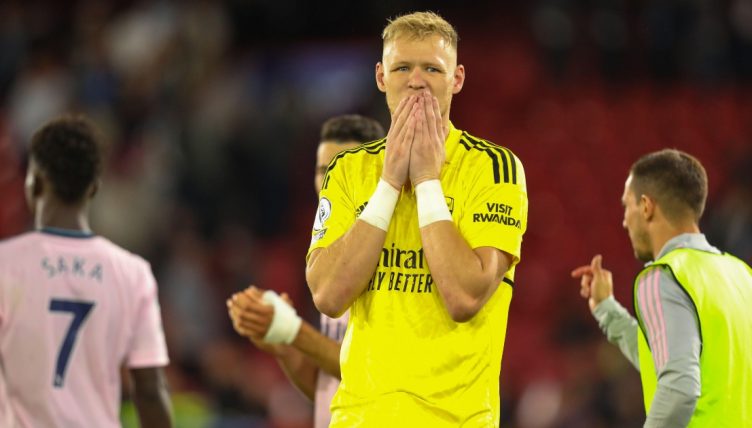 Ramsdale joined the club from Sheffield United last summer and his ability on the ball made him a good fit for Mikel Arteta’s style of play.

The England international is still waiting for his first Premier League assist for Arsenal but produced a pass that Kevin de Bruyne would be proud of during the win against Palace.

After the ball bounced back towards him, he immediately moved Arsenal up the pitch by firing it at team-mate Oleksandr Zinchenko with laser-like precision.

“No, it was practised,” Ramsdale told The Cycling GK podcast when asked if he always had that passing ability. “I was always comfortable with the ball at my feet, like when I was younger.

“As much as I never really played outfield, I did a little bit at school and every now and then for my friends’ Sunday league team. So I was always comfortable playing football.

“But when I got into the England set-up, Under-18s, I was sort of second-choice, third-choice. And basically, they spoke about playing out from the back.

“I was at Sheffield United, where it was [just] get the ball up the pitch, we will play off second balls. We’ll go into territory and we’ll play that way, let the footballers play.

“So [I’d] do their warm-up, possession, passing drills. And then when they went into their games, I’d just go home. So that was where that sort of came from.”

While modern goalkeepers need to be comfortable with the ball at their feet if they want to play in the Premier League, their main job will always be making saves.

Ramsdale helped preserve Arsenal’s clean sheet against Palace by keeping out Odsonne Edouard’s header in the first half and then making a great save to deny Eberechi Eze.

“Yes, especially the last one at the end – match-winners,” Arteta told Arsenal’s official website when asked about how important the saves were.

“That’s what you need when you’re coming away from home and you’re going to concede, and we didn’t concede much, but a little bit and Aaron was exceptional today.”

The technique, accuracy and perfect speed on it, too good on the eye 😮‍💨 pic.twitter.com/488JFSdhlM