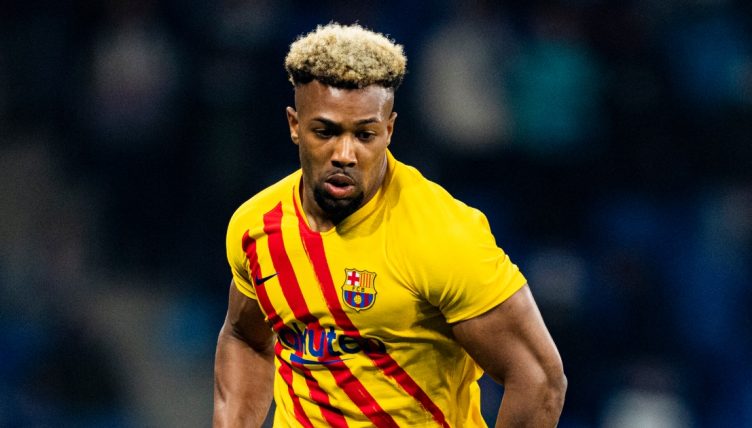 Adama Traore has started his second Barcelona stint in fine form, registering an assist in the win over Atletico Madrid, and should probably have opened his goalscoring account for the club during Sunday’s draw at Espanyol.

Traore re-joined Barcelona at the end of January, signing from Wolves on loan for the remainder of the season.

But, despite a memorable debut against Atleti, the winger was on the receiving end of a bizarre rant about his dribbling ability.

Jorge d’Alessandro, appearing on the controversial and often hilarious El Chiringuito, tried to suggest Traore had “no ability to dribble” – despite all the evidence pointing to the contrary.

“I didn’t see a superior Barca,” d’Alessandro began after victory over Atletico. “Adama Traore, a player with a lot of strength, one-on-one, it was like a boxing match!

“Football is strength? No, football is its details…details in the ring. I don’t like that! I see that as a soldier.”

We’re hoping that d’Alessandro’s outburst won’t affect Traore’s confidence too much, although the 26-year-old probably should have scored during Sunday’s 2-2 draw at Espanyol.

Barcelona were leading through Pedri’s first-half strike when Traore found himself unmarked and with just the goalkeeper to beat – but he fired his shot straight into the midriff of the Espanyol stopper and the chance was wasted.

Xavi’s side were trailing in injury-time before the much-maligned Luuk de Jong popped up with an important equaliser that keeps Barcelona well-placed to finish in the Champions League places.

“Adama is on loan until the end of the season but Barca’s will is to exercise the purchase option,” Laporta said during Traore’s unveiling. “It’s a free option, not obligatory, for either party,

“There are fixed amounts and at the end of the season we will sit down with Adama and his representatives and I wish that we exercise this option.”

Where are they now? The 8 Barca kids given debuts by Luis Enrique