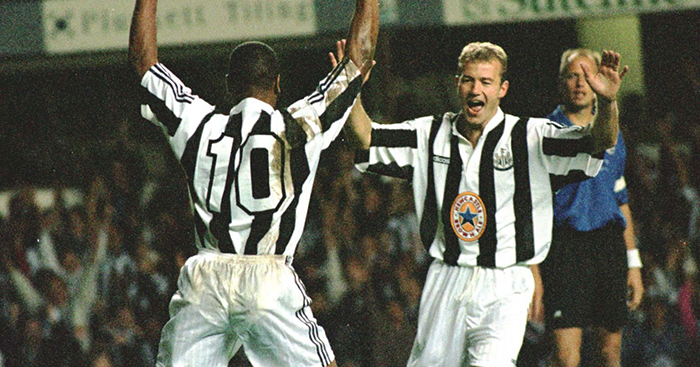 Alan Shearer grew up dreaming of wearing the No.9 shirt for Newcastle United – so there was never any doubt he was going to ask for it when he joined the club in 1996.

Shearer was a boyhood Newcastle fan but started his football career with Southampton and then won the Premier League with Blackburn in 1995 before eventually finding his way a year later.

Les Ferdinand was Newcastle’s No.9 at the time having inherited the shirt from Andy Cole, but he told us he “never held a grudge” towards Shearer for asking to take it off him after just one season.

What he may not have known at the time, though, is that as much as Shearer wanted the No.9, he wouldn’t have kicked up a fuss had Ferdinand said no.

“I grew up in Newcastle supporting and going to St James’ Park, and the No.9 is an iconic number for the people of Newcastle United,” Shearer said at NBC’s Premier League Mornings Live event in the US.

“Jackie Milburn was my dad’s hero, Malcolm McDonald, all these No.9s that have had it, and I just felt that if I was going back there I’d love to have that No.9 shirt.

“That’s the reason I asked Les, and he kindly said I could have it. It wasn’t a deal-breaker, it wouldn’t have mattered if he’d said no, but he very kindly said yes.

“For me to wear the No.9 shirt was a great honour.”

Alan Shearer is grateful to Les Ferdinand for letting him have the @NUFC No.9 shirt – but it wasn't a deal breaker. #NUFC

Shearer and Ferdinand were similar types of centre-forward and rarely played together for England, but Kevin Keegan felt the partnership could work for Newcastle and was certainly proven correct, with the pair scoring 49 goals between them in 1996-97.

“We were similar, we both loved crosses coming into the box and with the wingers that we had, with Gillespie, Ginola and Peter Beardsley, it was a very attacking team.

“So to have the both of us who were very similar centre-forwards in the same team worked pretty well.”