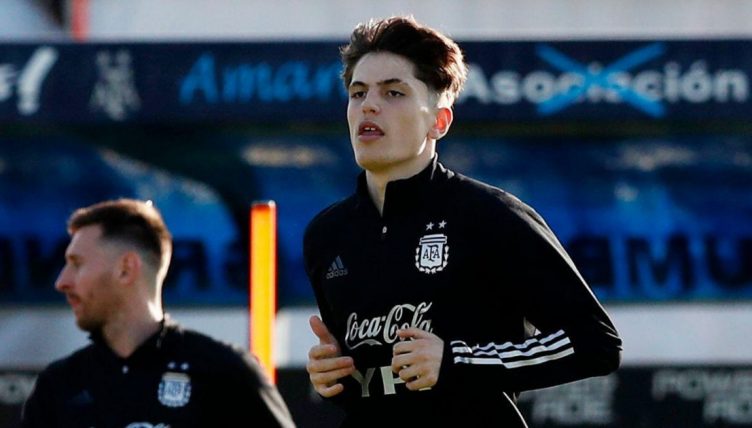 Alejandro Garnacho was hugely impressive for Manchester United’s youth teams in the 2021-22 campaign – and he carried that form onto the international scene, bagging a brilliant first goal for Argentina’s Under-20s.

Garnacho is of mixed Argentinian and Spanish heritage and has represented Spain at Under-18 level. But the 17-year-old was called up as part of a 44-man senior Argentina squad in March 2022 and later that month made his Argentina Under-20 debut against the USA.

At the end of the club season, the winger was again included in the South American nation’s Under-20 squad for the Toulon Tournament in France.

Garnacho made his first tournament start in the opening game against Saudi Arabia’s Under-20s and started again as Argentina faced Panama’s Under-23s in their second group game.

Early in the second half against Panama, the United youngster made a fine diagonal run and was put through by an inch-perfect pass from Matias Soule.

After taking one touch to steady himself, Garnacho wrapped his right boot around it and sent the ball flying past Emerson Dimas in the Panama goal.

It was an impressive way to open his account for Argentina and another feather in Garnacho’s cap after a club season in which he helped United to a brilliant FA Youth Cup win and made his first two appearances for the first team.

In April, United interim boss Ralf Rangnick said: “[Garnacho] has been training with [the first team] for the last two weeks and I know that he is one of the most promising players.

“[He is] still only 17, but a player that hopefully if he keeps his feet on the ground, if he keeps trying to get better every day, then he will not only be sitting on the bench but there is every chance he will be playing for this club.”

If he keeps scoring goals like this, he could make that step up to full-time senior football very soon.