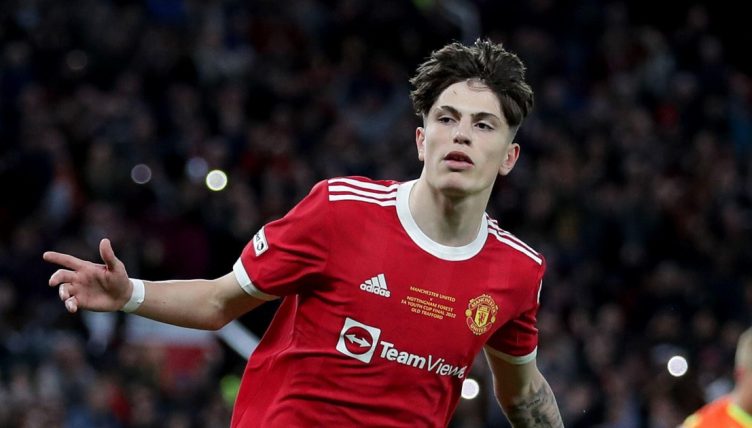 Alejandro Garnacho was Manchester United’s matchwinner as they beat Nottingham Forest 3-1 to win the FA Youth Cup – and his match-clinching goal was a wonderful solo effort that Lionel Messi would have been proud of.

Garnacho has rubbed shoulders with Messi this season as part of the Argentina squad and it’s clear that the 17-year-old has been taking influence from his legendary international team-mate.

Old Trafford was almost sold out for this showpiece of the youth football calendar as United looked to their youngsters to provide solace after a miserable season for their senior side.

And the U18 side made a fast start to the final against Nottingham Forest, with Rhys Bennett giving United the lead in the game’s early stages.

Forest’s Joshua Powell just a few minutes before half-time, but United restored their lead with just 12 minutes left on the clock through Garnacho’s ice-cool penalty.

And he netted his seventh of a memorable Youth Cup campaign in added time. After the fourth official had indicated a lengthy eight minutes of injury-time, the young forward doubled his tally with a silky finish to wrap up the win.

Dribbling through three Forest defenders before lashing the ball home, Garnacho underlined his immense talent and it was a strike worthy of clinching United’s first FA Youth Cup title in nine years.

Garnacho was named as United’s U18 Player of the Year before Wednesday’s game and made his first-team debut during April’s draw with Chelsea.

“Alejandro has had a fantastic season and really deserves this recognition,” United’s head of Academy Nick Cox said.

“Alejandro has shown great determination from the day that he arrived here from Spain, in the middle of a pandemic. He has adapted extremely well to life in Manchester and continues to improve on the pitch every day.”

And his Messi-esque goal against Forest will fill United fans with hope that tomorrow will be considerably better than today.