Watch: TAA and Havertz booked after squaring off in League Cup final 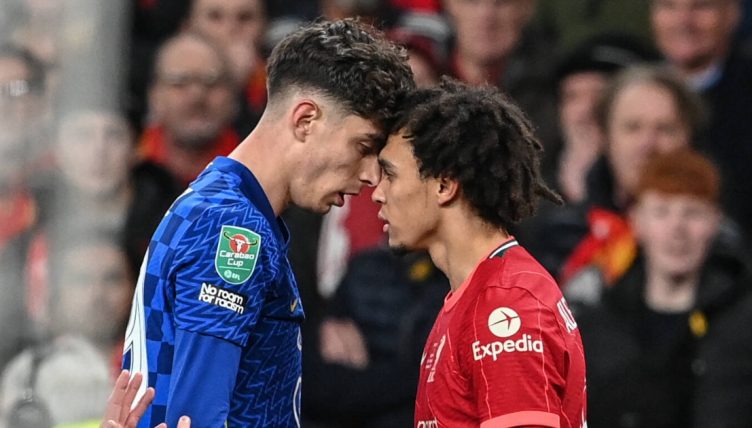 Things got feisty in the closing stages of Liverpool’s penalty shootout victory over Chelsea in the League Cup final at Wembley.

The closest things got to a flashpoint came midway through extra time, when Trent Alexander-Arnold and Kai Havertz tussled for the ball and clearly irritated one another.

Their legs came together as Alexander-Arnold got back to his feet after making a challenge, and the pair then exchanged words before butting heads – that weird thing you often see footballers do, for some reason.

Harvey Elliott and Antonio Rudiger both ran over, but just as the incident looked like spilling over, referee Stuart Attwell got involved and booked Alexander-Arnold and Havertz.

Things petered out from there, with the game eventually finishing goalless after extra time – but it was an entertaining game in which both sides created a number of good chances, while both sides had goals disallowed for offsides.

And things were stretched out even further in the penalty shootout, with all 11 players for both sides taking penalties until eventually Chelsea keeper Kepa Arrizabalaga – on as a late substitute especially for the shootout – skied his spot-kick over the bar, sending the trophy to Merseyside.

This was the first domestic cup trophy for Alexander-Arnold at his boyhood club, having already claimed the Champions League and Premier League.