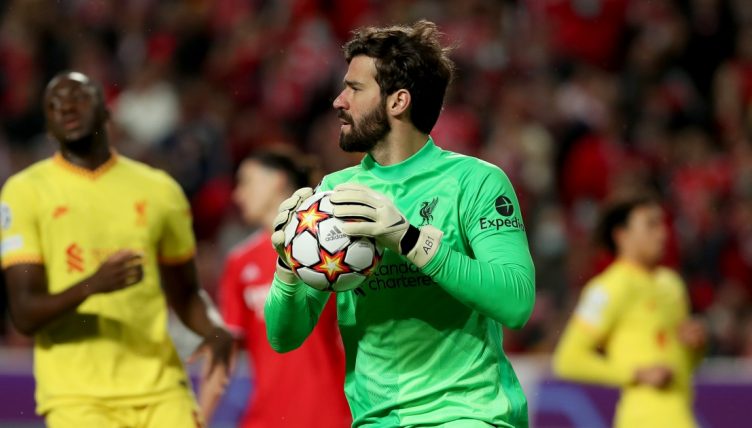 Despite being a world-class goalkeeper, Liverpool’s Alisson Becker is also renowned for his ability with the ball at his feet. And he showed it in the Reds’ 3-1 Champions League victory away at Benfica on Tuesday night.

Alisson is often the man to start attacks for Liverpool as he acts as a sweeper-keeper and likes to showcase his passing range.

During Liverpool’s 3-1 win away at the Estadio da Luz in the Champions League, Rafa Silva tried to win the ball back for the hosts by putting pressure on the goalkeeper.

But Alisson showed great composure, producing a drag back that sent Silva to the shops for a few bottles of Sagres before passing to a Liverpool team-mate.

“I think the big thing is having confidence,” Alisson recently told Sony Sports India when asked about his ability with his feet. “You get confidence from doing things, from playing.

“You need to have a team which likes to play with the goalkeeper as well and you need to have a manager who gives you the freedom to play because you can be good [for the team]. But if your players turn their back to you when you have the ball, you can only kick long balls and work like that.

“I have the skills that are needed but I worked a lot on it when I was playing for my youth team. I had a manager once who loved the [Pep] Guardiola team from Barcelona which used the goalkeeper a lot, so he tried to do that with his team in the Under-20s and it helped me a lot.

“Then I went to Rome and improved a little bit, but here at Liverpool is the place that I feel most comfortable because the players really want me to be an extra player on the pitch.”

pic.twitter.com/yJw3ddSMEx Alisson is a better dribbler than CR7