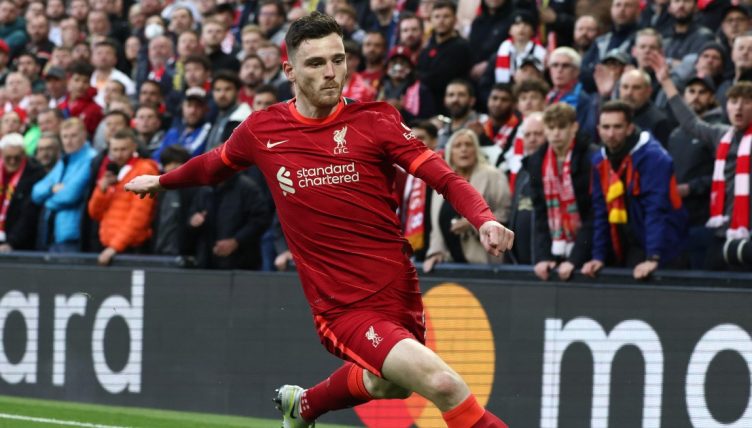 Andy Robertson made a vital late challenge for Liverpool against Newcastle before hilariously firing the ball at Diogo Jota in the Reds’ crucial 1-0 Premier League victory on Tyneside.

Liverpool won the game courtesy of a first-half goal from Naby Keita, but their failure to find a second goal led to a nervy end despite Newcastle’s struggle to craft many clear-cut chances.

At one point close to the end of the game, it looked as if the rejuvenated Magpies were through on goal down the left when a good ball seemed certain to find a black and white shirt.

But Robertson made a late dash, sliding to win the ball and intercept it before Newcastle could be through on goal.

From there he drove forward with the ball, showing a huge amount of energy and desire despite having played every minute of the match.

His impressive run forward ended in hilarious fashion, however, when he accidentally powered the ball into Jota’s chest after trying to play it over the top to Mo Salah.

The result moved Liverpool temporarily back on top of the table but Manchester City returned to the summit with their victory against Leeds later in the day.

“Coming here, team in form, six home wins on the bounce, great weather, everybody in a good mood, pretty much everything was prepared for another home win,” Klopp said after the match.

“The only group who wanted to avoid that were my players.

“It was an outstanding football game. First 15 minutes, we had to adapt slightly a little bit. That’s normal.

“Newcastle changed a little bit, put Joelinton on the left side, and kept the ball there, went for second balls.

“We struggled a bit, tried to adapt to it, did better. When the ball was on the ground, we were really good. I really liked how we played, how we kept them quiet. I can’t remember a lot of counter-attacks.”