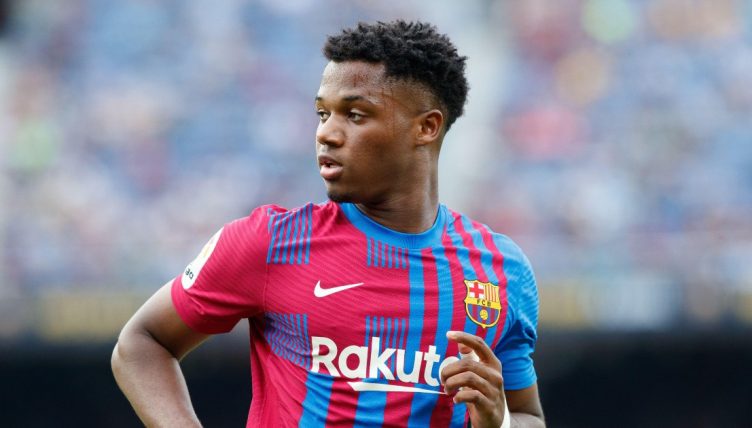 Barcelona’s long-injured wonderkid Ansu Fati has produced some fantastic skills on his return to full-strength Barcelona training, including a stunning bicycle kick.

The 19-year-old Spaniard has struggled with a variety of injuries for the past two seasons, significantly limiting his game-time.

But he is still regarded as one of the world’s foremost footballing prospects and his return to the Barcelona squad will be warmly welcomed by their fans.

The training video shows Fati scoring a number of goals, including a brilliant bicycle kick at the end that highlighted just how good the youngster can be.

He has been included in the Barcelona squad for the game against Mallorca but is only expected to play a handful of minutes as he steps up his return to full strength.

“I’ll tell you in advance that Ansu will be there. He’s very good, he’s made a big change,” Xavi said ahead of the match.

“Tomorrow, if everything goes well, he will play a few minutes at least. He is smiling. I am very happy to have him. You see different things [from him]. He is a special player and he will go very well for us.”

He went on to discuss how Fati had to see himself as one of the team going forward for both the club and himself.

“I understand football as something collective,” Xavi said. “They all have to [put work in], each one in his role.

“It is clairvoyance that he is a special player, different. But he has to be very important from now on. One of the most.”

Barcelona will jump above Sevilla into second place with a win at Mallorca, having been in danger of not getting Champions League football when Xavi initially arrived.