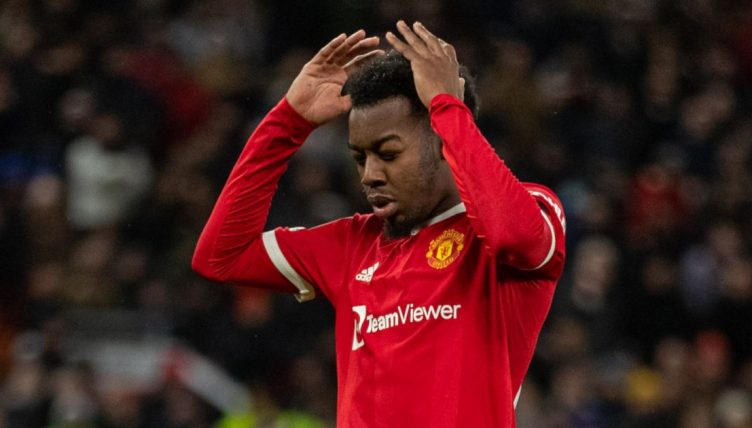 Anthony Elanga put in a goal-saving challenge during Manchester United’s 1-1 Premier League draw with Leicester at Old Trafford on Saturday. Unfortunately for United fans, the man he stopped from scoring was his team-mate Marcus Rashford, who could have won it late on.

United put in a poor performance against Brendan Rodgers’ Foxes side, especially in the first half, when they were at their apathetic worst, failing to move the ball with any speed or conviction and offering little threat behind the Leicester defence.

The only chance they had in the first 45 fell to Bruno Fernandes, and he managed to completely fluff his lines.

In the second period, United were slightly more lively, but Leicester took the lead in the 63rd minute through former Manchester City man Kelechi Iheanacho.

Ralf Rangnick’s men soon got back into it though, with much-improved Brazilian midfielder Fred drawing them level.

From there, it was Leicester who played the better football – and United could well have fallen behind were it not for a stunning fingertip save from their inspirational Spanish goalkeeper David de Gea.

But, very late on, it looked like Marcus Rashford – who again did not start, despite the absence of Cristiano Ronaldo – had fashioned a very presentable opportunity to grab a last-gasp win for United.

Rashford received the ball on the edge of the area, nipped through a gap in the Leicester defence and looked set to shoot.

Anthony Elanga, however, had other ideas. In an attempt to take the shot on himself, Elanga turned and swung out a leg. Rather than hit the target, he hit his team-mate, essentially slide tackling Rashford, allowing Kasper Schmeichel to collect comfortably and denying United the three points.

To make things worse, even if Elanga had converted the opportunity, it wouldn’t have counted. After Elanga got involved in the play, the assistant raised their flag for offside as the United youngster was standing in an illegal position when Rashford took the touch to set himself up.

Marcus Rashford tackled by Anthony Elanga in the box pic.twitter.com/TatVOsF6Dq