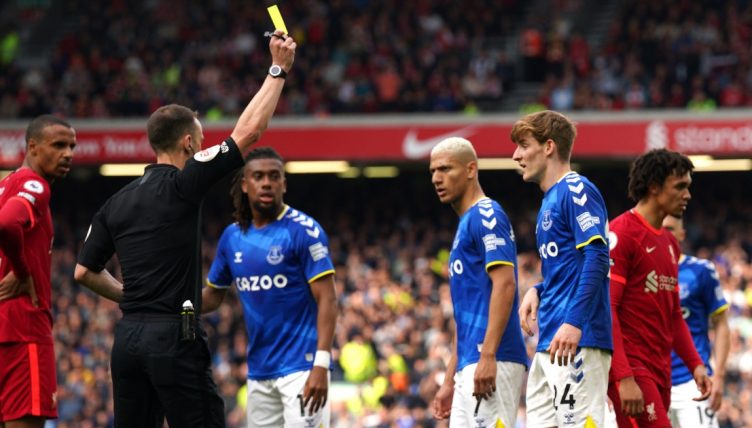 Everton’s Anthony Gordon has taken to Twitter to make his feelings clear after he was controversially denied a penalty in the 2-0 Merseyside derby defeat away to Liverpool.

Gordon put in a lively performance to keep Trent Alexander-Arnold in the clash at Anfield as Frank Lampard’s side deployed a counter-attacking gameplan.

The 21-year-old Everton academy graduate was the visitors’ main outlet as they sat deep with a low block to keep Liverpool busy.

He was booked for diving in the first half, with replays showed that there surely wasn’t enough contact from Naby Keita to send him falling to the floor in the manner he did; an incident that might have had a bearing on the winger being denied a penalty in the 53rd minute when the game was still goalless.

It wasn’t the only time in the game that Gordon sprang free and went charging into the final third.

He’d just skipped into Liverpool’s box when Joel Matip used his physicality to challenge him; the Liverpool centre-back wasn’t anywhere near the ball, but referee Stuart Attwell deemed it a fair challenge.

There was no further action taken from the video assistant referee at Stockley Park.

“If you look back with that on VAR, there’s questionable things going on, maybe that’s to be expected when you come here [Anfield],” Everton boss Frank Lampard told reporters in his post-match press conference.

“It was a penalty. If that was Mo Salah at the other end, he gets a penalty. You don’t get them here. That’s the reality of football sometimes.”

An hour after the final whistle, Gordon himself posted a replay of the controversial incident on Twitter. The accompanying emojis speak for themselves – take a look yourself to see if you think he has a right to be aggrieved.