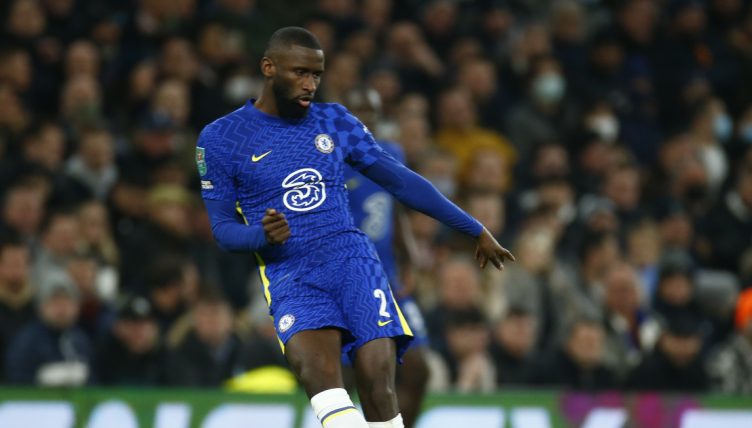 Antonio Rudiger has established himself as a key player for Chelsea since the arrival of Thomas Tuchel, and is a key figure both in defence and going forward.

In Saturday’s game away at Crystal Palace, an important fixture for Chelsea to make their place in the top four more secure, Rudiger came agonisingly close with a fierce shot from 30 yards which was well saved by Vincente Guaita in the opposition goal.

Picking up the ball in the middle of the park with plenty of space, the centre-back drove forward before unleashing an almighty strike.

It flew with some dip and Guaita in goal for Palace had to produce an excellent save to tip it wide for a corner.

The Germay international already has two league goals to his name this season and Chelsea are hoping to tie him down to a new contract.

The 28-year-old’s current deal expires at the end of the season, and Rudiger has been linked with a whole host of clubs including Real Madrid, AC Milan and Juventus.

Rudiger looked certain to be on his way out before Tuchel’s arrival, having not seen eye to eye with Frank Lampard, but was reborn in the back three which saw Chelsea win the Champions League and Club World Cup within a year.

In addition to Rudiger, Kepa Arrizabalaga is another player who looks revitalised under the former Dortmund boss, and Rudiger was quick to praise him after the Club World Cup win in February.

Speaking about his manager, Rudiger had nothing but kind words.

“He’s an absolute football expert who knows exactly what he expects from us on the pitch, and I think you can tell by looking at us,” the defender claimed.

“With his style, he takes the whole team with him and doesn’t forget anyone.”

“You just have to look at the performance of our actual second goalkeeper, Kepa, in the semifinals for example,” Rudiger told Chelsea’s website.

“Kepa has been written off by many but has done an outstanding job replacing Edou (Mendy) in recent weeks. Also because as a team we all believed in him, what a strong goalkeeper he still is.”

If Rudiger fires in more shots like this, it’s only a matter of time before he hits a Puskas contender.

What a shot from Rudiger pic.twitter.com/zT8IiMhtoX