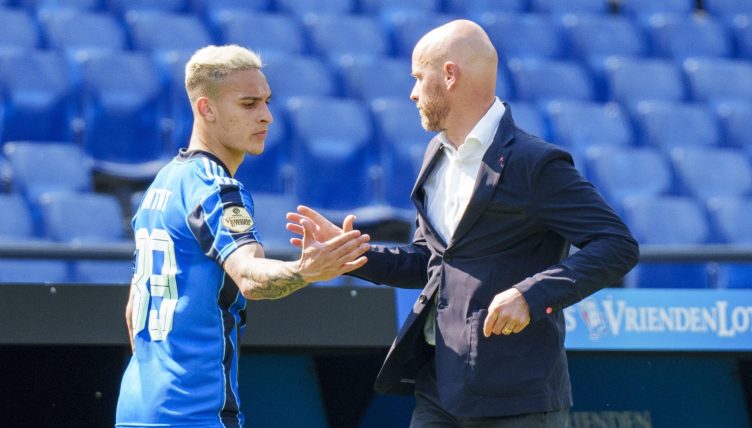 After a long and complicated transfer saga, Manchester United manager Erik ten Hag is finally about to reunite with Antony.

Ten Hag made Antony one of his top transfer targets and United have agreed to pay Ajax a guaranteed fee of £80.75million and a further £4.25million in add-ons.

The manager first identified the winger’s abilities during his time in charge of Ajax, signing him from Brazilian side Sao Paulo for an initial £13million in 2020.

“He played for Brazil at Under-23 level, which is a big deal here, to qualify for the Olympics,” South American football expert Tim Vickery said on Sky Sports News.

“They had the vital game, the last game of the campaign, just before the pandemic at the start of 2020. They had to beat Argentina.

“Antony had been first choice throughout the campaign and for the first time, they dropped him. Why? Because he was playing winger, left-footed, high on the right, and every time, he was slowing them down.

“He was picking up the ball and cutting back in onto his stronger foot and he would take away the momentum of the attacks. You were thinking at this point: raw.

“But Ten Hag got him and developed him into a quick little winger who can play on either flank, whose decision-making is greatly improved and who can also work back and put in a bit of a shift.”

He made an immediate impact at the Johan Cruijff ArenA and registered 10 goals and 10 assists in 46 appearances in his debut campaign.

The Brazil international then got 22 direct goal contributions in 33 appearances in 2021-22, including goals against Borussia Dortmund and Sporting Lisbon in the Champions League.

Antony is now regarded as one of football’s most exciting young wingers, and he has also credited Ten Hag for his development.

“Every player under his guidance becomes a better footballer through his training,” he told Dutch newspaper De Telegraaf. “Since my arrival, he has given me a lot of confidence and believed in what I can do.

The duo clearly have a great relationship and an old clip that has surfaced on social media shows them practising their skills together during an Ajax training session.

Ten Hag, who played for Twente, De Graafschap, RKC Waalwijk and Utrecht during his playing career, lets the ball roll down his back before passing to Antony, who then does some keepy-uppies and an around the world.

They’ll now be able to recreate this at United’s Carrington training ground after Antony arrived in Manchester.