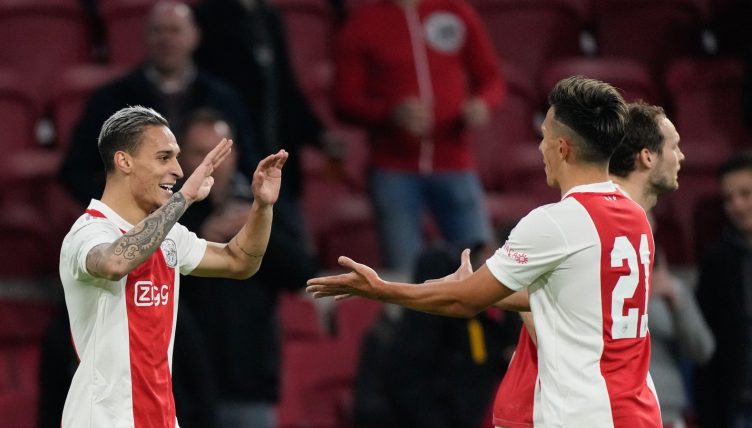 Antony is set to complete an £85million move to Manchester United and will be reunited with a couple of familiar faces.

The Brazil international joined Ajax in 2020 and spent two seasons playing under Erik ten Hag, who is now in the Old Trafford dugout.

Ten Hag played a jey role in Antony’s development, helping him become one of the most exciting and dangerous players in the Eredivisie.

“Every player under his guidance becomes a better footballer through his training,” Antony told Dutch newspaper De Telegraaf earlier this year. “Since my arrival, he has given me a lot of confidence and believed in what I can do.

He will also be linking up with Lisandro Martinez, who won the Ajax Player of the Year award in 2021-22 before joining United in a £56.7million deal.

The pair had a good relationship on and off the pitch and that was evident during a Champions League game against Borussia Dortmund in October 2021.

During the game, Martinez brought the ball out from defence and picked out Antony on the right wing, showcasing his sensational passing range.

Antony, who scored in that 4-0 win over Dortmund, then jumped in the air and brought the ball under control with an outreagous piece of skill. The duo will now be looking to recreate that move at Old Trafford.

While Ten Hag and Martinez will be delighted to see Antony at United, Ajax manager Alfred Schreuder has publically crticised the forward. He started their first three games in 2022-23 but then went on strike and refused to play for them.

“Absolutely,” Schreuder said on on Ziggo Sports programme Rondo when asked if Antony could be fined. “I don’t think it’s good that it’s possible within our club.

“If you’re Ajax, it’s just bad that this happens. I’ve talked about it with him. If you’re disappointed for a day or two, I understand, but at some point you’re a professional.

“Then I said: ‘I will continue with the guys who are there’. At a certain point you get angry about it, like… what are we doing? Looking at the total picture, that frustrates you as a trainer, but also how you stand in the world.

‘Then I think, ‘you’re just a player, you just have to do your thing’. But my personal feeling is that it’s just bad.”

READ MORE: Antony next: The 9 players to play for Manchester United & Ajax