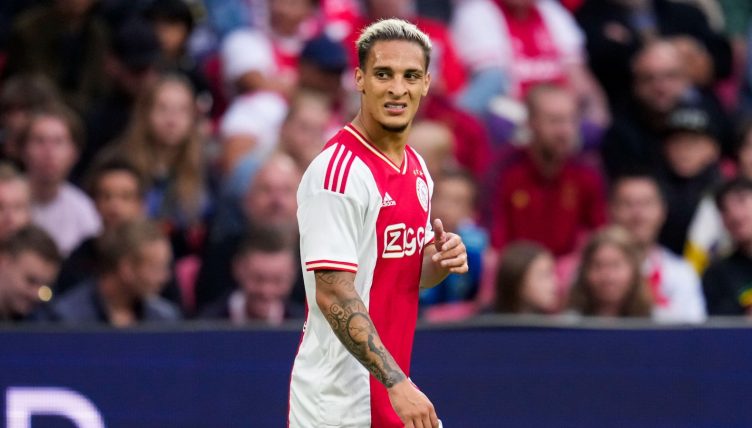 Antony has sent his first message to Manchester United fans after leaving Ajax and joining the Red Devils in an £80.25million deal.

The Brazil international spent two years working under Erik ten Hag at Ajax and developed into one of the most exciting young forwards in Europe.

He registered 22 goals and 20 assists in 79 appearances over the last two seasons, helping Ajax win two Eredivisie titles and a KNVB Cup.

After featuring in Ajax’s opening three games in 2022-23, Antony then went on strike in an attempt to force through his move to Old Trafford.

The strategy worked as Ajax then accepted United’s bid of £80.25million. The Red Devils could potentially pay another £4.75million in add-ons in the future.

United have now spent over £200million on transfers this summer, bringing in Lisandro Martinez, Tyrell Malacia, Christian Eriksen, Casemiro and Antony. They also look set to sign Newcastle goalkeeper Martin Dubravka on loan before the end of the window.

“This is an incredible moment in my career to be joining one of the most iconic clubs in the world,” Antony told United’s official website after the deal was completed.

“I’m thankful to everyone who has believed in me, especially my family, and all my coaches and team-mates, because I could not have got here without them.

“Playing under Erik ten Hag at Ajax was perfect for me and my development. His style of football and coaching brings out the best in me, and I am excited by what he has told me about his plans and ambitions in Manchester.

“My time at Ajax was fantastic and I will always be grateful for the trust they put in me, but now I am ready for the next challenge, and I can’t wait to join my new team-mates and play my part in bringing success to Manchester United.”

While walking around the Carrington training ground in his new kit, Antony then decided to film a direct message for the United fans.

“What’s up fans,” he said. “Antony here, look I’m already wearing the shirt of the biggest club in the world. Just here to tell you that I’m really excited and looking forward to being on the pitch in this shirt and honouring you fans.

“Much love and let’s make history together.”

Antony wasn’t registered in time for the Premier League game against Leicester City on Thursday night but will hope to make his United debut against Arsenal on Sunday.

🤳 Straight from the heart. @Antony00 is a RED! 🔴#MUFC pic.twitter.com/wzRA7El4PD

READ NEXT: The day Man Utd’s Antony showed he was destined to be a superstar