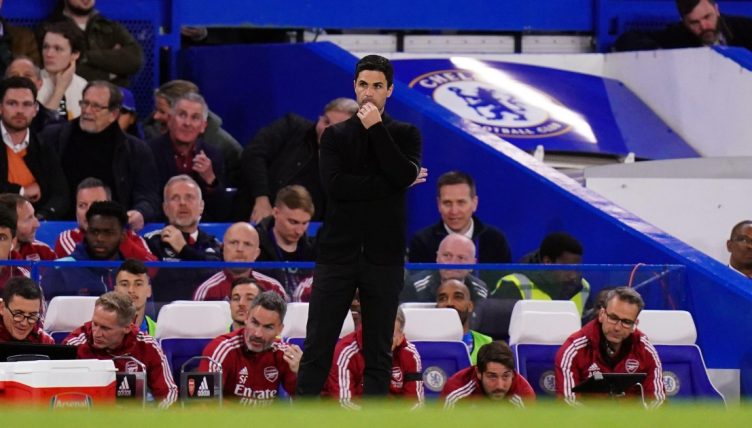 Arsenal boss Mikel Arteta has become known for his flamboyant gestures on the touchline and Wednesday night’s match against Chelsea was no exception.

The Gunners travelled to Stamford Bridge needing to arrest a run of three Premier League defeats that’s seen their hopes of qualifying for the Champions League fade.

But Arsenal have often performed well against Chelsea and scored two first-half goals from Eddie Nketiah and Emile Smith Rowe.

Arteta would have been delighted at his team’s renewed vigour but he couldn’t hide his displeasure at events surrounding Chelsea’s second equaliser.

There was a quick VAR check after Cesar Azpilicueta’s strike, for a perceived foul on Ben White, but any sense that the goal would be disallowed was quickly allayed. But the Arsenal boss didn’t see the funny side.

Minutes afterwards, Arteta was seen giving the fourth official a mouthful before stalking away with his arms folded in an exaggerated manner.

Arsenal eventually won the game 4-2, reigniting their hopes of reaching the Champions League, and provided a firm answer to critics who had focused on the Gunners’ struggles in front of goal.

“This is what we have, this is our reality,” Arteta told Sky Sports News. “I wish I had 40 goals in the team.

“I know I have three players in the squad in the next seven games are going to score 21 goals, I go to sleep very nice and think tomorrow is going to be great.”

Arsenal’s next match will be against Manchester United on Saturday and are due to face top-four rivals Tottenham and West Ham before the end of the season.