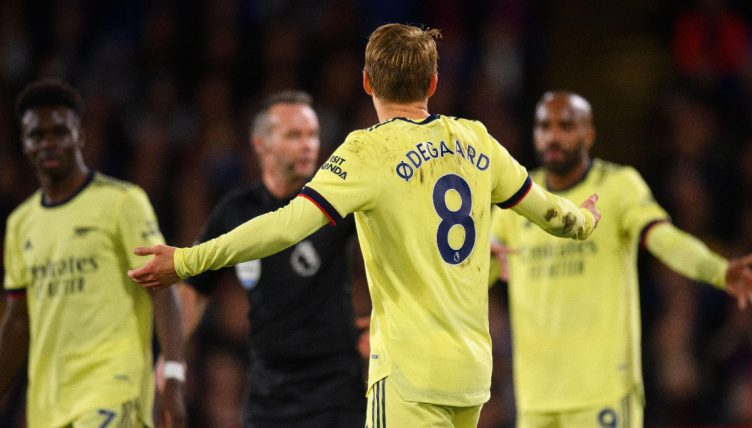 Arsenal were well below par during their 2-1 defeat to Brighton and one of the worst moments came right at the death.

Leandro Trossard gave Brighton the lead at the Emirates before Enock Mwepu made it 2-0 to the away side in the 66th minute.

Martin Odegaard had pulled one goal back and Arsenal were pushing forward in injury time to try and find a late equaliser.

After Arsenal won a corner and a chance to whip a dangerous ball in, goalkeeper Aaron Ramsdale went forward to try and win a header.

What happened next, however, extinguished any chance of a miraculous goal and the fans in the ground did not hide their displeasure.

Odegaard went to take the corner but instead of delivering a cross, he passed the ball to substitute Nicolas Pepe in the box.

Pepe also chose not to cross and bizarrely passed the ball back to Odegaard. The Norweigan, perhaps not expecting to receive the ball again, was still in an offside position and the linesman’s flag went up immediately.

The defeat was Arsenal’s second in the week, after losing 3-0 to Crystal Palace five days before, and what was looking like a successful season of progress for MIkel Arteta’s side now seems to be unravelling quickly.

The Spanish manager was clearly unhappy at such sloppiness, which had been on display all afternoon, as Arsenal failed to ever get going.

“We made it really difficult for ourselves. We were sloppy, we had no purpose to attack, we were really imprecise and we didn’t want to play forward,” Arteta stated after the game.

“We’ve shown for many weeks how well we can play; it has been a difficult week and we’ve lost some big players, but if you get what you want, not everything is going to be with a blue sky.”

“This is our team in the good moments and especially the defeats. There are many games to play but we have to be concerned about that performance, especially the first half.”

If Arsenal are to recover and secure a top-four finish, they will need to cut out moments like this.