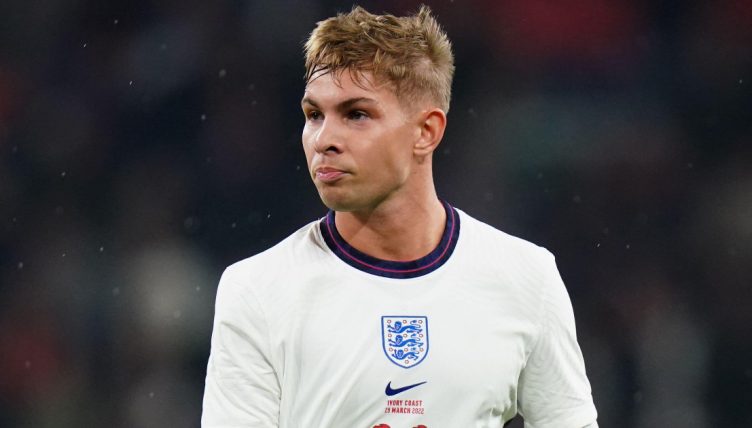 As England’s senior side laboured to a 1-1 draw against Germany in Munich, the Under-21 team had a much more enjoyable evening, beating Albania 3-0 at Chesterfield’s Technique Stadium, and Arsenal attackers Emile Smith Rowe and Folarin Balogun combined for the opening goal.

Balogun netted a brace on the night with Aston Villa’s Cameron Archer scoring the third to put England in the driving seat for Euro qualification.

Smith Rowe, who had previously been included in the senior side, was unlucky to miss out on a place in the squad for the Nations League matches, but was in good form for the Under-21s and created the opening goal after pouncing on an Albanian error.

With just two touches, the 21-year-old stole the ball from an Albanian centre-back before delivering a perfect cross with his weaker left foot for Balogun to power home with ease.

Smith Rowe enjoyed a stunning first campaign as Arsenal’s No.10, scoring 10 Premier League goals in 21 starts and earning the adoration of the fans as he and Bukayo Saka stepped up to the mantle.

Balogun had a difficult first half of the season but moved to Middlesbrough on loan in the January window, where he was impressive in spells as they knocked Manchester United and Spurs out of the FA Cup but narrowly missed out on a play-off spot.

Smith Rowe wasn’t too disheartened to drop down to the youth side after winning senior caps after Arsenal’s poor end to the season saw them miss out on a top-four spot, and the midfielder struggled with an injury for the latter stages of the campaign.

“No matter who I play for, I want to give my all for the team. I just like to work hard for everyone,” Smith Rowe stated.

“It’s been a difficult end to the season back at my club so it’s important for me to come here and give my all for the team and try to enjoy it as much as I can.

“The seniors has a lot of depth and a lot of quality. I’ve just got to keep working hard and see what happens.

“It’s important to stay level-headed. You’ve got to stay humble and don’t get too upset if you don’t go to the first team.”