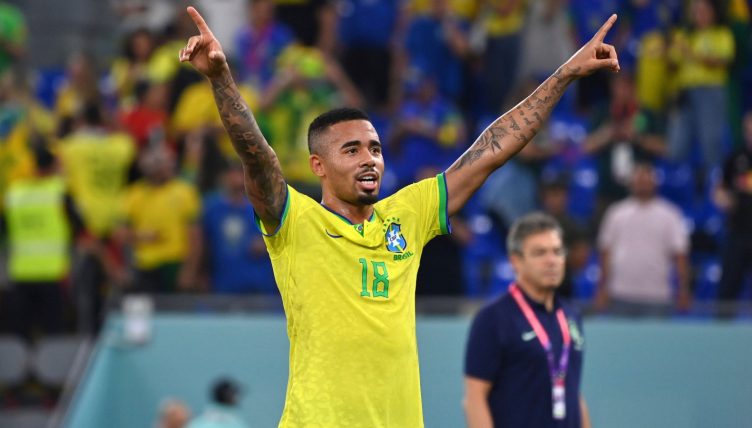 Gabriel Jesus came off the bench during Brazil’s 1-0 win over Switzerland in their World Cup match on Monday and produced the filthiest touch of the match that left the opposition defence bamboozled.

Jesus forced his way into Brazil’s World Cup squad after a successful start to the season with Premier League leaders Arsenal and he was named on the bench for the second group match against Switzerland.

He was subbed on with 17 minutes left and the game goalless, needing to lift Brazil who had toiled against stubborn opponents.

And Jesus was impressive during his cameo, dragging the tiring Swiss defence all over the pitch and celebrated Casemiro’s late winner with glee.

But his most impressive moment came during injury time as Brazil looked to run down the clock and book their passage to the last 16.

As a Brazilian clearance travelled towards him, Jesus was being tightly marked by a Switzerland defender but managed to give him the slip with an incredible turn before proceeding to set Vinicius Jr. through on goal with a pinpoint pass

Rivaldo has urged Jesus to be patient for his opportunity to start at the World Cup.

Rivaldo told Betfair: “If Gabriel Jesus was fighting to become a starter in the Brazilian national team his space was closed by Richarlison against Serbia and now the Arsenal striker just needs to be patient enough to wait for an opportunity that should come if Brazil gets to the latter stages of the tournament.

“If that’s the case, then he will have at least a chance as starter to prove Tite was wrong by letting him on the bench, anyway it will be tough because Richarlison is now full of confidence after scoring twice at the start of the competition.”