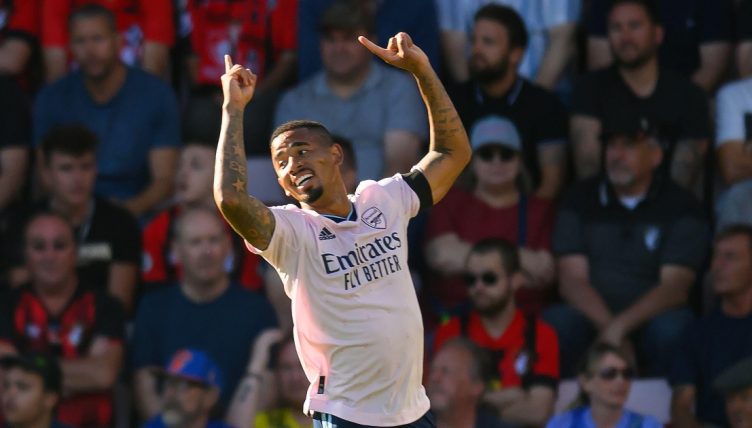 It’s still early in the season, but the early signs point to Gabriel Jesus being the signing of the summer. According to transfer insider Fabrizio Romano, Arsenal had to fight off competition from Real Madrid for his signature.

Arsenal have started the 2022-23 campaign with three successive league wins for the first time since the 2004-05 season, and Gabriel Jesus has been one of their star players in each game so far, taking his scintillating pre-season form into start of the competitive campaign.

The Brazilian, who arrived from Manchester City in the summer, looked incredibly lively in the opening 2-0 win over Crystal Palace.

He then notched two goals and two assists in the 4-2 win against Leicester, while yesterday he played an instrumental role in the opening goal before assisting Martin Odegaard’s second in the 3-0 victory at Bournemouth.

But had things gone a little differently over the summer, he might have been wearing the white shirt of the European champions.

“Congrats to Arsenal for Gabriel Jesus,” began Romano on his YouTube channel.

“Because it’s incredible the impact of this player. He’s doing fantastic. £45million – very good strategy from the director Edu.

“Because in January, Arsenal wanted Vlahovic as their striker. It was impossible so they decided to wait and not waste any money on a player they were not trusting.

“To wait and not sign any other striker, and then to invest and put all their efforts on Gabriel Jesus, and they did it, and they got a fantastic player. Congrats to Edu and Mikel Arteta, who is doing a great job on Gabriel, congrats to the player, who is doing very, very well with incredible performances.

“Many clubs wanted him – Chelsea, Tottenham tried to sign him but in the end, the strategy from Arsenal was the best one.

“Let me say that Real Madrid wanted Gabriel Jesus. Carlo Ancelotti told the board he’s the perfect player for us. It was May when Real Madrid missed out on Kylian Mbappe, but it was impossible to proceed with Gabriel because of the extra-EU players rule.

“It was impossible for Gabriel to join Real Madrid, and this is why they never had any chance to make a proposal, but they wanted Gabriel. And now Arsenal are enjoying a top, top player.”

The rule in La Liga is that each club is only allowed a maximum of five non-EU players. Los Blancos had the limit, with Vinicius Junior, Eder Militao, Rodrygo, Federico Valverde and Casemiro.

Perhaps if they’d had the foresight that Casemiro would be leaving for pastures new, they might have acted to gazump Arsenal for Jesus’ signature, given a slot for non-EU players has now opened up.

Gabriel Jesus next: Ranking the 15 Brazilians to play for Arsenal