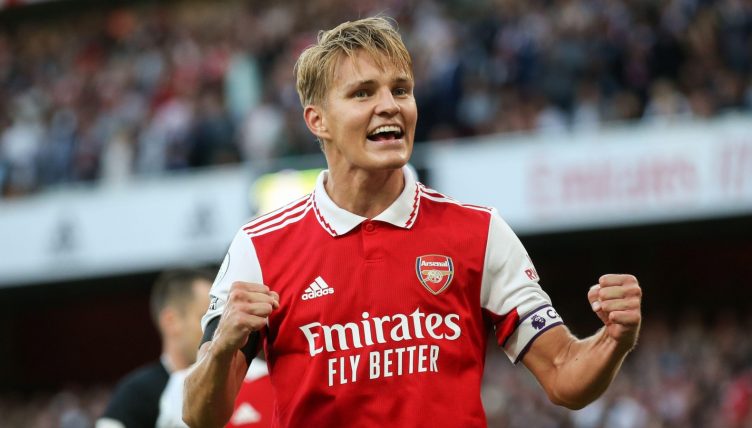 Martin Odegaard and Gabriel reflected the good mood in the Arsenal dressing room during a funny post-match interview after their 2-1 win over Fulham.

Arsenal were looking to maintain their perfect start to the Premier League seson after beating Crystal Palace, Leicester City and Bournemouth in their opening three games.

But Fulham took the lead in the 56th minute after Gabriel lost possession on the edge of his own box and Aleksandar Mitrovic fired past Aaron Ramsdale.

Odegaard equalised with a deflected strike before Gabriel redeemed himself with a scrambled finish from close range in the 85th minute.

“After I lose the ball, my head is down,” Gabriel said after the game. “But I look [at] my brothers, they say ‘Gabby, let’s go, let’s go!’, and I put my head up. And I’m so happy to score, and the team and the supporters helped me.”

The Gunners held on for the win and Sky Sports named Odegaard as ther Man of the Match. The Norway international scored the equaliser, made two key passes, completed five dribbles and made three tackles in an impressive performance.

But Gabriel seemingly wanted to keep the Man of the Match award before reluctantly handing it over to Odegaard in a funny moment after the game.

“I’m really happy with the performance, the attitude, and the mentality that the team showed,” Mikel Arteta said in his post-match press conference. “We were on top of the game, it was about being patient and the goal would come because we were deserving, but we had trouble with mistakes.

“We made an error, it cost us again, but the team showed that against adversity – Gabby individually, how he continued to play – and the unbelievable support we have in the stadium makes things much easier, and the team just has to win.”

He added: “The reaction of everyone after the goal straight away, the reaction of the stadium, gives support to the player, belief, and then the player has to show courage to continue playing. It’s about how you respond, and I’m really pleased. The way he’s [Gabriel] changed mentally, the way he approaches every single day, it’s different to a year or two ago.

“He looks after himself every day. Football is the most important thing in his life apart from his daughter and his family. How consistent he is every day in his habits and how much he really wants to be one of the best.”