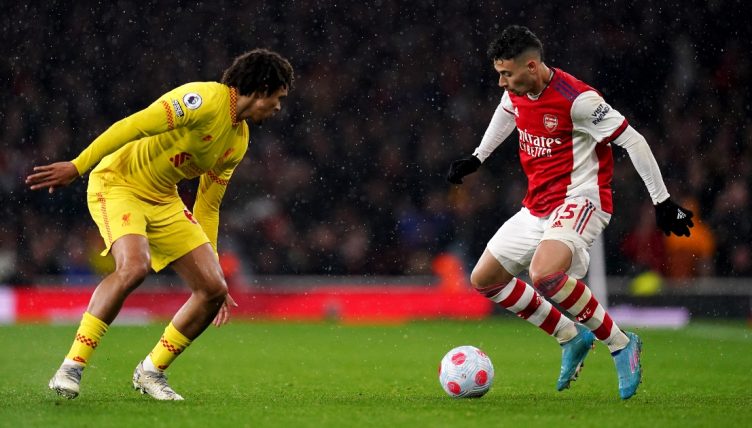 Arsenal’s Gabriel Martinelli produced yet another eye-catching display as he tormented Liverpool right-back Trent Alexander-Arnold at the Emirates.

Jurgen Klopp’s Reds still won 2-0, closing the gap behind Premier League leaders Manchester City to just one point. It was their ninth successive league win, but Arsenal gave them a tougher test than most have in recent weeks.

Alexander-Arnold had a particularly difficult evening, with Martinelli beating him on more than one occasion. Liverpool skipper Jordan Henderson also found out first-hand what a skilful player the 20-year-old forward is.

In the 49th minute, the Gunners starlet turned on the afterburners to go skipping past Alexander-Arnold down Liverpool’s right flank.

Henderson diligently tracked back to help out the full-back, but Martinelli pulled off a filthy nutmeg against him and went skipping into the box. Another deft touch beat Alexander-Arnold a second time, but he couldn’t quite provide the finishing touch as his cut-back failed to find a team-mate.

Klopp seems to sing the praises of Gabriel Martinelli every time Liverpool come up against Arsenal. The latest meeting was no exception, with Klopp defending Alexander-Arnold’s defending against the talented Brazilian.

“Obviously both teams had spells of possession where the other team was patient and didn’t want to step out, but we had to,” Klopp told reporters after Liverpool came away from north London with three points.

“Trent [Alexander-Arnold] did exceptionally well against Gabriel Martinelli. If anybody tells me Trent can’t defend, I’ll knock them down. I don’t know what the boy has to do anymore.”

The German coach seemed impressed all-round with Arsenal’s performance on the night.

Liverpool have faced Arsenal four times this season and haven’t conceded, winning three and drawing the other, but Klopp evidently feels they’re increasingly a threat.

“In the first half we didn’t have enough players between the lines. The movement was not exactly what it should have been,” he added.

“It was not a big problem because we were prepared for a really difficult game. The speed Arsenal have and their physicality – they’re a really talented team, so I wasn’t angry at half-time. I just wanted to change a few things.”

Martinelli one of a kind man 🔥 pic.twitter.com/J9yKK3rzBi