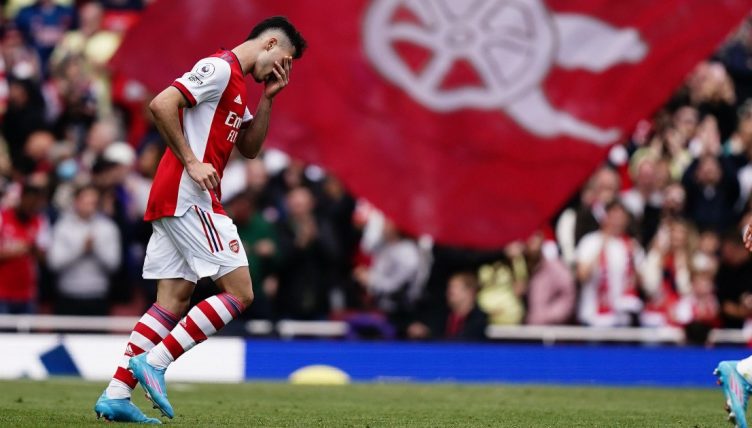 Arsenal’s Gabriel Martinelli was denied an equaliser for the Gunners against Brighton in their Premier League clash.

Martinelli thought he had leveled the game for the North London side but a VAR check showed he was slightly offside when the ball was played to him.

Bukayo Saka whipped in the ball from a corner in added time of the first half, but Gabriel was unable to convert it at the first attempt. The ball then came to Lacazette who headed it back across goal to Martinelli who turned it into the empty net.

He ran over to someone in the crowd to celebrate, but a lengthy VAR check proved that the Brazilian striker had strayed ever so slightly offside when the ball was headed back across goal.

Martinelli has been in good form this season and has helped Mikel Arteta’s side since the departure of Pierre-Emerick Aubameyang in January.

He (Martinelli) trains incredibly hard, he is always willing to do more and he is not scared or afraid to take risks – and that is what I like about him,” Arteta said of Martinelli earlier in the season to Sky Sports.

“You cannot play every action at 100mph, it is impossible. It is not very efficient for you because you burn yourself out after a few minutes, and then you’re just chasing a situation and not reading exactly what is needed.

“Gabi is doing much better at that. We have to try to do that without losing the passion, the energy and this capacity he has to just affect the game with the way he acts on the pitch.

“Every time the ball is 50/50 he is going to chase it and he’s going to use his body, his speed, his technical ability to get away from you and you have to be careful, because he can attack you one v one, he can attack your back, he can make movements off the ball. He is a real threat in front of goal”