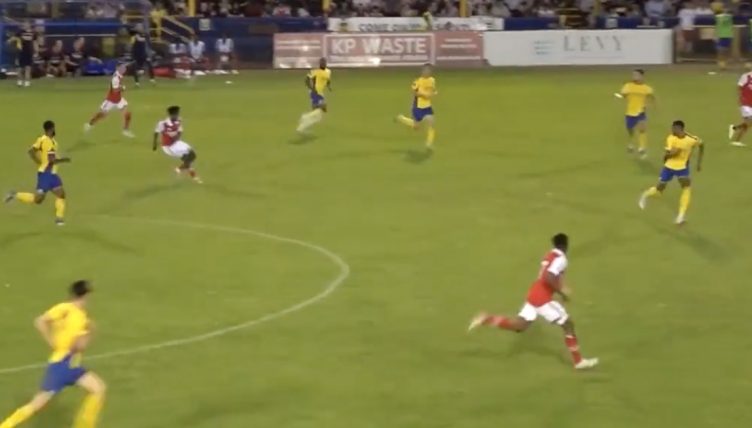 Arsenal starlet Joel Ideho has gone viral on social media after scoring an absolutely stunning goal from almost 50 yards out.

Ideho has caught the eye after turning out for an Arsenal XI in a pre-season friendly against non-league outfit St Albans City. He beat two players before cutting inside and opening up space just past the centre circle.

It was then that he spotted the goalkeeper off his line and executed a perfect David Beckham-style lob into the back of the net. One of those immensely satisfying finishes you just want to watch over and over. It also proved to be the match-winner in a 1-0 victory.

The 19-year-old left-winger signed his first professional deal with the club back in October 2020 after arriving from Ajax’s academy. He made 14 appearances in the Premier League 2 last term for Arsenal’s youth side.

It will be worth keeping an eye on how Arsenal’s Under-21s fare in the upcoming 2022-23 campaign, with the likes of Bukayo Saka and Emile Smith Rowe famously shining after graduating from the Gunners’ famous Hale End academy in recent years. One of the club’s most famous sons Jack Wilshere has also returned home to coach the Under-18s.

Mehmet Ali is in charge of the Under-21s; the coach arrived as assistant back in January but has since moved to the top job since Kevin Betsy left to take over Crawley Town.

“Mikel [Arteta] has a huge influence on the academy, he has a huge interest in the academy as well as all of his coaching staff,” said Ali when he was promoted last month. “I talk with them regularly about the players, about the under-21 players and I’ve been very fortunate enough to be in a position where they’re supporting me in terms of what they’re looking for, which I think is key.

“It’s really important to know what Mikel is actually looking for, to then give that information to the players to make sure that they’re showing that when they do get the opportunity to go up with the first-team.”

The Under-21s begin their season against Manchester United on Saturday and on the evidence of this clip, Ideho is certainly one to to be keeping an eye out for.

Joel Ideho earns an Arsenal XI a 1-0 victory against St Albans City in a pre-season friendly with THIS…⤵️ pic.twitter.com/VrQxZ4Z49P