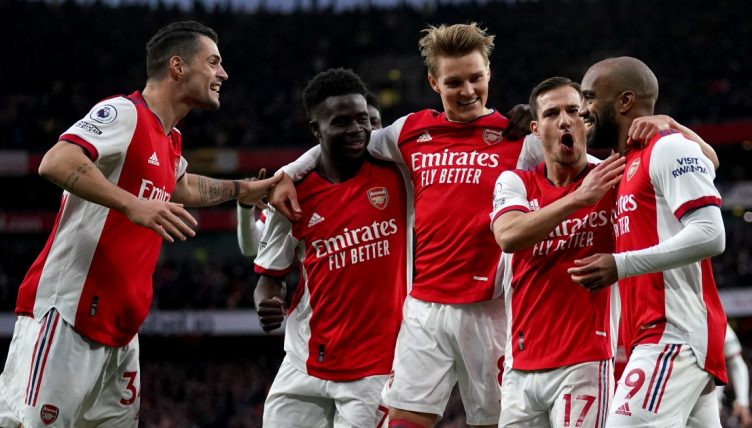 Arsenal moved back into the Champions League spots with a 2-0 win over Leicester on Sunday, with one passage of play underlining their superiority at the Emirates Stadium.

The Gunners had slipped to fifth following Manchester United’s victory over Tottenham the day before but they reasserted their claim on fourth place with a comfortable success over Brendan Rodgers’ side.

Goals from Thomas Partey and Alexandre Lacazette clinched the three points for Arteta’s team – who now have three games in hand over United in the race for Champions League qualification.

But the Arsenal boss isn’t getting overly excited by his team’s five-game winning streak.

“The reality in football is when you start to predict what can happen no one would get it right – the only thing we can control is our performance,” Arteta admitted after the game.

“We are in a good position but there is still a lot to fight for. Next up is Liverpool – we know how tough it will be but we will try to win it.

“Without putting in a performance we don’t beat Leicester. They are a good side and made it tough for us. It was a big win for us.

And their dominance was illustrated by a move that included 25 passes, Martin Odegaard showcasing his growing collection of backheels and the Emirates Stadium soundtracked by the ‘oles’ of the Arsenal supporters.

Leicester simply couldn’t get the ball off their opponents and Arteta must have been thrilled by his side’s control and precise passing and movement.

Arsenal will face Liverpool on Wednesday in what is a huge game for both clubs.