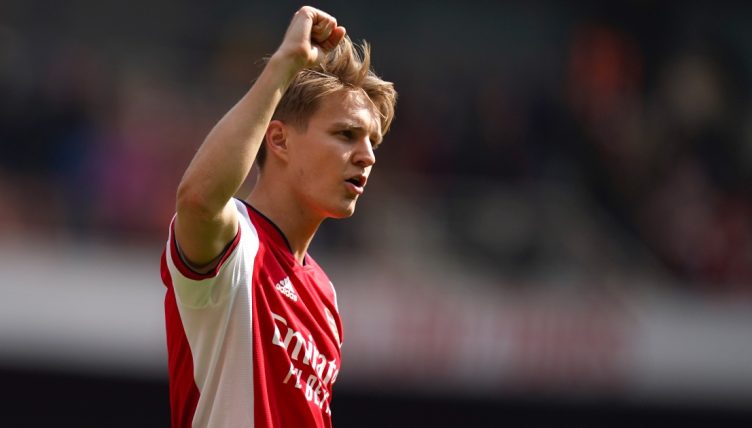 Arsenal playmaker Martin Odegaard offered another reminder of his class when he pulled off an outrageous backheel through ball in the Gunners’ 3-1 victory over Manchester United.

Mikel Arteta’s men have taken a giant leap towards qualifying for the Champions League this week, having responded superbly to three successive defeats by registering back-to-back victories over Chelsea and United.

Saturday’s win has effectively taken the Red Devils out of the race for the top four, leaving Arsenal and north London rivals Tottenham battling it out.

Later in the day, Spurs failed to take three points on their visit to Brentford, which leaves them two points behind Arsenal with five games left to play. The local rivals are set to play one another at the Tottenham Hotspur Stadium next month – a clash that could well prove decisive in which side qualifies for the Champions League.

If Arsenal do return to Europe’s most prestigious cup competition, one of the players most responsible will be Odegaard, who once again demonstrated his brilliant creativity in the victory over Ralf Rangnick’s side.

The highlight of the Norway international’s afternoon came in the 25th minute when he played a sexy backheeled flick into the path of Eddie Nketiah, who stung the palms of David de Gea with a fiercely-struck effort.

Odegaard’s importance to Arteta’s squad has been underlined by wearing the captain’s armband on occasion in recent weeks, a leadership role that he’s relishing.

“It’s big, of course, but it does not change much. I feel like I’m doing the same things,” he told tv2sport.

“There are more people around who think about it. But it is a great recognition and a great declaration of trust. I take that as a big compliment, but beyond that I do the same as always.”