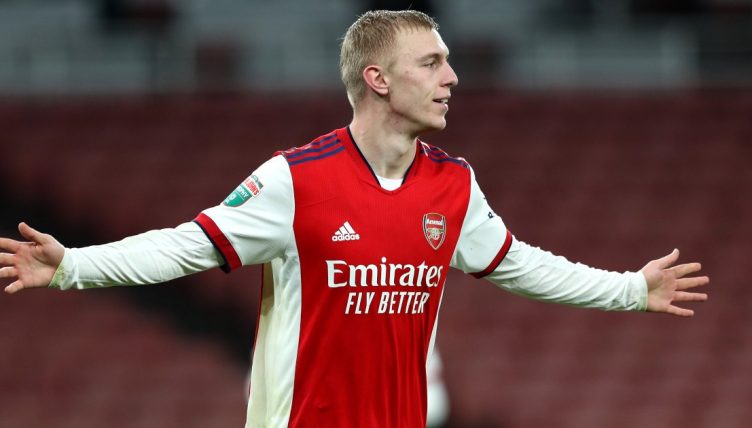 Arsenal Under-21s beat Chelsea Under-21s 4-1 in a thrilling Papa John’s Trophy game at the Emirates on Wednesday night and the second of the young Gunners’ goals was finished very coolly by 18-year-old striker Mika Biereth.

Biereth only joined Arsenal from Fulham in the summer of 2021, but he’s already making an impression in north London.

He has seven goals and three assists in 12 games in Premier League 2 and has been turning out against senior pros in the Papa John’s, which features the youth teams of the Premier League’s big boys as well as the first teams of clubs in League One and League Two.

Arsenal progressed from the group stage of the competition alongside Swindon and ahead of Newport County and Plymouth Argyle.

In the second round, they beat Ipswich on penalties, setting up Tuesday’s third-round tie against the Under-21s from the Chelsea academy, which has a great track record of producing players in recent years.

The Arsenal academy boys showed they were more than up to the task, however, beating the Blues 4-1.

In an eventful first half, James Olayinka opened the scoring for Arsenal, before Chelsea’s Xavier Mbuyamba was sent off after 35 mintues.

Chelsea equalised soon after the red card, but Arsenal’s Mika Biereth restored the lead three minutes before the interval.

Taking advantage of the extra space on the field, Arsenal’s youngsters worked the ball from right to left, finding Mazeed Ogungbo.

Ogungbo’s cross was beautifully weighted, and Mika Biereth was on hand to apply the finish. Biereth controlled it on his chest, before taking a touch out of his feet and slotting it past Teddy Sharman-Lowe in the Chelsea goal.

It was a moment of quality centre-forward play and set Arsenal up for the win. They added two more in the second period, the first of which was a stunning effort from Omari Hutchinson.